"Muck Bee? No one calls Zinger a muck bee and gets away with it! I'll show you!"
—Zinger in the Donkey Kong Country comic[1]

Zingers are one of the most recognizable enemies in the Donkey Kong series. They are common, pestering enemies in many stages. They have appeared in many forms since their debut in Donkey Kong Country.

Zingers heavily resemble wasps but are much larger, reaching the size of Diddy Kong. Instead of compound-eyes, they only feature two massive eyes closely joined together. A prominent stinger can be found at the tip of their abdomens while a set of usually smaller stingers line up the back of said abdomens. Zingers have a pair of antennae, wings, mandibles and three pairs of legs, however the full-grown adults are never seen using their legs for any purpose whatsoever (including for walking), even in official rendered artwork.

Due to the stingers covering a large portion of their bodies, Zingers cannot be defeated with a normal jump attack or a roll/cartwheel from the Kongs. The slightest contact will defeat a Kong in the Donkey Kong Country trilogy, though in later games the heroes were given more health to help deal with this problem. They can only be defeated with the use of barrels, kannonballs, some animal buddies or the weapons that were introduced in Donkey Kong 64.

Zingers come in many different color swaps in the original Donkey Kong Country and even more so in its Game Boy Advance remake. They all share the durability of the basic yellow Zingers, except for the Red Zingers. In Donkey Kong 64, there is a robot variant known as Mecha-Zinger.

Zingers are seemingly eusocial insects, with the first two games in the Donkey Kong Country series indicating the species are ruled by a pair of larger Zingers, the Queen B. and King Zing, who are encountered as bosses separately in diferent games. The Zingers were eventually revealed to naturally live within massive hives. Though never explicitly stated, it is likely that only the Queen B. is able to produce more Zingers, with the assistance of King Zing.

Despite their internal hierarchy, in each of their appearances the Zinger race are servants and allies of the Kremling Krew. Although seemingly of equal rank to most of the membership, the Zingers along with their rulers ultimately follow King K. Rool.

Zinger's first appearance was in the original Donkey Kong Country. Here, they were annoying, very common enemies found throughout Donkey Kong Island, including the arctic region known as Gorilla Glacier. Zingers were mostly stationary and could only be defeated with the aid of a barrels or some animal buddies. In most cases however, Donkey and Diddy Kong have no choice but to avoid these enemies in many stages. Queen B. appears in the game as the boss in Vine Valley, and could summon fellow Zingers in the Game Boy Advance remake. Most Zingers in Donkey Kong Country are yellow, but other colors indicate their flying trajectory.

Zingers were essentially the same in Donkey Kong Country's follow up, Donkey Kong Land, aside from color degrading due to the Game Boy's hardware limitations.

Despite the sheer number of Zingers and the presence of Queen B., no structure that could be considered a home for them was ever seen. Although Queen B. is found in the hollow interior of a banana hoard she was guarding for King K. Rool, it was evidently not a place fit for her kind. It was only in the sequel were the origin and natural habitat of the species became known.

Zingers would return in Donkey Kong Country 2 sporting a slightly altered appearance. The most notable difference are their legs and mandibles, both of which are now yellow instead of brown. Their abdomen have a smooth surface instead of their prior irregular shape. Active Zingers are now found in two color variations only: the standard yellow and the highly durable red type, with the latter being resistant to all animal buddies, regular barrels, treasure chests and kannonballs. Only TNT Barrels can defeat them.

It is in this game that the Zingers' ecology was revealed. The species originate from Crocodile Isle, where they live within massive hives mostly found in the island's region of Krazy Kremland. Due to their placement in what is evidently an amusement park of artificial origin, it can be assumed the Zingers infested the area and made their home there with or without the Kremlings' consent. It is also possible that the Kremlings constructed the park by invading what would otherwise be Zinger territory. However, the two areas are separated from one another and largely don't interact, therefore implying there is no territorial dispute between species in either case, as in fact, Kremlings can be seen inside the hives with no retaliation from the Zingers, furthermore a single hive can also be found in the Gloomy Gulch region. These hives are presumably built by the Zingers themselves using a form of wax, and the interiors are filled with an overwhelming amount of oozing honey. Numerous honeycomb chambers cover the background wall and though many of these are empty, there are some which contain:

The hives are where infant Zingers are nurtured and grown before they eventually fly out to either stay and defend the hives or leave to the outside world (presumably to search for food). Their range of exploration appears to be limitless, as Zingers are seen throughout the entirety of Crocodile Isle all the way to Donkey Kong Island from the first game.

Queen B. likely left her home island to colonize and spread her kin while her spouse, the powerful King Zing, stayed behind to continue reigning as the boss of Krazy Kremland. The visual differences between the Zingers of both islands may thus result from adaptations.

By the end of the game, the whole Crocodile Island sinks to the depths of the sea. Zingers return in the game's semi-sequel Donkey Kong Land 2, not changed much. They still have their hives and their king, risen above by Kaptain K. Rool, before the island is sunk again.

Zingers were absent from the third installment in the Donkey Kong Country and Donkey Kong Land series, and replaced by the very similar functioning Buzzes. Buzzes retain the Zinger's commonness, annoyance, and even similar functioning colors, with red buzzes being resistant to most of the barrels, however the green Buzzes are the regular ones.

The Zingers are likely to be missing due to the events of the last two games, in which Queen B. and King Zing were defeated and their natural habitat destroyed, drastically reducing their numbers.

Zingers returned in Donkey Kong 64. Zingers here were not as common or annoying, as they can be defeated much easier with the Kongs' new weapons introduced in this game, given by Funky Kong. A new type of Zinger, Mecha-Zinger, appears in the level Frantic Factory, and they are harder to defeat. Earlier on, Zingers generally charge at the Kongs on sight (especially in DK Island, Jungle Japes, and near the entrance of Angry Aztec), but as the game progresses, starting with Angry Aztec, Zingers can drop green orange grenades making them the second enemies in the game to do so. The first being the overweight Klumps.

Zingers are usable items in the 2003 build of Diddy Kong Pilot. These are items that players may send behind him/her to make the Zingers get in the way of the other planes, making those planes collide into the bees.

A trailer for the now canceled Donkey Kong Racing suggested the Zingers were going to be rideable as Donkey Kong and Taj the Genie were racing each other in a forest-like area on Zingers.

Zingers would make various spin-off appearances since. Some appear in Donkey Konga as cameos. In DK: King of Swing and DK: Jungle Climber, they return as enemies. In Donkey Kong Barrel Blast, Zingers are basic enemies that fly around, and only take one hit to kill.

In the Club Nintendo comic Donkey Kong Country, Zingers appear again as enemies of Donkey and Diddy Kong. Much like in the games, the Zinger is docile and does not rapidly attack the pair until Donkey Kong provokes the wasp. Donkey defeats the Zinger, by doing a special rolling move and then kicking the enemy, despite direct contact with it without getting hurt by its stingers not possible in the games. The Zinger can talk as well, saying its stinger is deformed.

Their latest appearance was a sticker cameo in Super Smash Bros. Brawl, where it raises resistance to slashing attacks by five points. 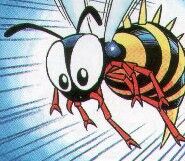 Artwork of Zinger in the Donkey Kong Country comic. 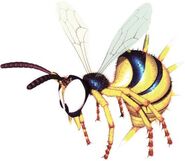 Zinger as seen in Donkey Kong 64.