Some time after the Tiki Tak Tribe being free over Donkey Kong Island, following a volcanic eruption, and their leaders hypnotizing animals to steal bananas, Xylobone is first seen in the boss level Thugly's Highrise of the Cliff world. It hypnotizes and possesses Thugly to fight Donkey and Diddy Kong. Thugly's attacks include ramming, munching, jumping over and spitting fire at the enemies. Similar to Mugly, the first boss, the Kongs must jump on Thugly's back when it is unprotected by his heated backplates. The creature will be dealt with after receiving nine hits. After that, Xylobone, like all of the other Tiki Tak Tribe leaders, will leave the possessed boss' body and stay dizzy for a few moments. Once again, the player can jump towards the tiki and send it flying by pounding multiple times or wait for it to leave.

Later, Xylobone and the other Tiki Tak Tribe leaders appear again in the Tiki Tong Tower, where they use the stolen bananas to turn themselves into hands for Tiki Tong. After Tiki Tong is defeated by the heroes in the final boss battle of both games, Xylobone is presumably destroyed along the other leaders.

Xylobone has large eyebrows and brownish/yellowish eyelids. It has a triangle shaped head turned on its axel, which has four visible slits inside the bottom of it, as well as a vivid arrow on its forehead. The tiki also has a long, skeletal body, with five rows of bone-like structures. These structures have holes on the end and have signs of burns on the ends. A small detail is that the tiki has a pointed end at the bottom of its "spine". The last noticeable thing about the tiki is that is has circle shaped hands, like Gong-Oh. 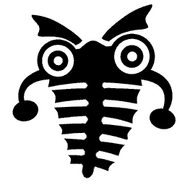 Xylobone's silhouette always seen at the screen when the Kongs are defeated in any levels of the Cliff world in both games.