Wrinkly's Save Cave, as the name suggests, is where Dixie and Kiddy Kong can save their game in Donkey Kong Country 3: Dixie Kong's Double Trouble!. It is run by Wrinkly Kong. It replaces the Kong Kollege from the previous game.

Wrinkly retired from teaching due to her being tired of all the Kremlings pestering her. She moved on to the Northern Kremisphere and set up shop, not as a teacher in a formal classroom, but in a series of caves found in the area. As with Kong Kollege, there is a Save Cave per world, which is indicated on the map screen by a small cave with a flashing, white light. Kongs can enter at any time and save their game for free. Wrinkly also keeps the collected Banana Birds in the cave.

This location is notable for having Wrinkly occasionally play the Nintendo 64 when the Kongs visit her; this is indicated by a remixed version of the "Inside the Castle Walls" theme from Super Mario 64.

In the Game Boy Advance remake, the Save Caves across the Northern Kremisphere were replaced by Cranky's Dojo, and Wrinkly herself only has one Retreat on the overworld near Funky's Rentals, since the player can simply save the game by accessing the 'Start' menu.

The name was tweaked to "Wrinkly Refuge" in Donkey Kong Land III, but there are no major changes aside from the lack of Banana Birds.

Official artwork of the Save Cave. 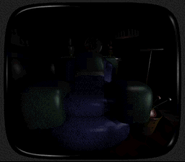