Winky's Walkway is the first stage in Monkey Mines from Donkey Kong Country. It comes after the boss battle with Very Gnawty and before Mine Cart Carnage.

Winky's Walkway is the first stage of Monkey Mines and is named after Winky, who also makes his first appearance here and is prominently featured in the stage. The stage is an odd series of walkways, riddled with Kritters, Gnawties, and a few Neckies as well. Winky appears in an animal crate early in the stage, beyond the first series of walkways- simply jump on one of the two Neckies to reach his crate. Winky is best used to reach Bananas as well as some K-O-N-G Letters, and even bonus stages. It is also is the first walkway stage.

There are four Kritters, seven Neckies, a lone Zinger, Oil Drums which spew out Gnawties and a Mini-Necky which can only be found in the Game Boy Color version. 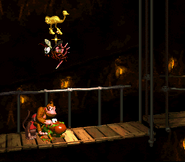 Donkey, Diddy and Winky underneath the Expresso Animal Token and a Zinger.

Donkey, Diddy and Winky underneath a blue Zinger and the Expresso Animal Token.