Wigglevines appear only in the Forest level Wigglevine Wonders and are always found sleeping peacefully. They possess a long vine that the primates can grab and hold. After the primates holding on the vine of a regular-sized Wigglevine, it will wake, acquire a nervous expression and carry Donkey and Diddy Kong over large pits, in order to them to progress through the level. During the riding, the heroes must avoid enemies and can collect items by climbing up or down the vine. The Kongs can also ride the flying plant by stepping on its head, situation made possible by a hidden barrel cannon in the same level.

There are also small-sized variants of Wigglevines with vines that allow the primates to swing for short distances or descend heights. But if the heroes take too long to let go its vine, the small Wigglevine will break the vine and disappear at the top of the screen by flying upwards, quickly dropping down the Kongs in the process.

The appearance of the Wigglevine is that they have long vines sprouted from underneath them, which is shrouded by green leaves. Their body is like that of a vase, and they have large mouths. Their body is yellow, and gets a reddish hue on the right side in the picture. They have red flower-like structures on top of them, that can sustain even a Kong’s weight. When they are about to pop, they turn red. Smaller Wigglevines have fewer leaves and just have a propeller on their heads. They still have large mouths though. 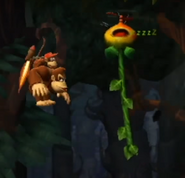 Small-sized Wigglevine as seen in the game Donkey Kong Country Returns for Wii.

Small-sized Wigglevine about to break its vine as seen in the game Donkey Kong Country Returns for Wii.