Wacky Pipes is first seen in the opening cutscene of both games, where the tiki hypnotizes a giraffe to help steal all bananas in the Donkey Kong Island.

Later, Wacky Pipes appears in the boss level Mangoruby Run in the Forest, where it is seen playing a tune to hypnotize and control the creature Mangoruby. When the boss is defeated, like all of other Tiki Tak Tribe leaders, Wacky Pipes will leave Mangoruby's body and stay dizzy for a few moments. The player can jump towards the tiki, beat it multiple times, and send it flying away. If the player waits, Wacky Pipes will eventually fly away towards the screen and leave.

Wacky Pipes is seen again in the final boss fight, where Tiki Tong turns all of the Tiki Tak Tribe leaders into hands for it. Like the other tikis, Wacky Pipes is presumably destroyed when the Kongs defeat Tiki Tong.

Wacky Pipes has a large amount of feathers all over its body. These feathers are blue and yellow and cyan. It also has two different colored eyelids, one blue and one red. The blue eye is larger than the other. It also has yellow eyebrows. Another feature is that the tiki has a ring design around its right eyeball. The tiki also has an insane, yet zen expression in its eyes, similar to Gong-Oh, except Wacky Pipes' eyes are not rendered backwards colored. The tiki has three pipes protruding from the back of its head, which seem to have marks on them from an unknown cause. It has what appears to be a net on its face, symbolizing what its mouth would look like, if it had one, assumably. It has arms with three claws on them. 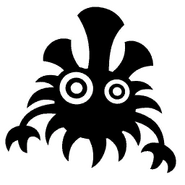 Wacky Pipes' silhouette always seen at the screen when a Kong loses an extra life in the Forest world of both games.