Vine Valley is the third world of the Donkey Kong Island in the game Donkey Kong Country. The area is a vast pine tree forest that includes a small treehouse village and a bridge leading to a small jungle and a temple. The temple is located at a large bay connected to the sea. In the Super Nintendo Entertainment System and Game Boy Color versions of the game, the time of day seems to be around dusk due to the setting sun in the background. Queen B. is the boss of Vine Valley.

This is the first stage of Vine Valley, and is also the first forest stage of the game. The flying variants of Neckies must be used as stepping platforms for the Kongs to bounce on and jump over pits. And the variants of these vulture enemies found on the ground throw coconuts around trying to harm the primates. Mini-Neckies make their debut appearance in this stage in the Super Nintendo Entertainment System and Game Boy Advance versions. They are small vulture enemies capable of spitting nuts forward from their mouths, and some of them can move up and down, being dangerous small targets. Progress over pits is usually made by using moving Barrel Cannons. And some Zingers are also found in the same stage.

This second stage is the first treehouse village type in the game. It has many Barrel Cannons to traverse pits from treehouse to treehouse, requiring good timing when activating them. Taking place on a high place, many pits are present across the stage. it also contains leaping Kritters and Gnawties as enemies.

Forest Frenzy is the third stage of Vine Valley. It contains less grounded platforms and many moving vertical ropes over pits. Usually, aerial enemies will try to collide against and harm the heroes on the ropes. During later sections of the stage, the Kongs must travel on ropes moving over very wide pits, and move up or down in order to avoid large groups of Zingers and regular Neckies. Leaping Kritters are also common enemies on the ground.

Stage swapped with Clam City in the Game Boy Advance version of the game Donkey Kong Country.
Temple Tempest is the final temple stage in the game. Variants of Gnawties on stone wheels will chase the primates throughout sections of it. After moving under or over these invincible enemies and starting the pursuit, the heroes must progress fast and go past groups of enemies and pits. There are vertical and swinging ropes for traversal over pits, and some bouncing tires for reaching high places. Inside the first Bonus Room, there is an Animal Crate containing Expresso the Ostrich. The Animal Buddy is capable of gliding in the air by the player tapping the "Jump" button during the fall constantly, and his long legs allow him to walk next to small enemies, such as regular Gnawties, without suffering harm. However, Expresso is unable to bounce on regular enemies safely. Enemies here also include leaping Kritters and Zingers.

Stage swapped with Temple Tempest in the Game Boy Advance version of the game Donkey Kong Country.
Orang-utan Gang is an unique stage, usually taking place on treetops instead of on the jungle floor. Manky Kongs, orangutan enemies which throw an unlimited number of Wooden Barrels, make their debut appearance here, giving this stage its name. Before the second half of the location, Expresso the Ostrich can be found inside an Animal Crate. Other enemies present in the stage are Zingers, leaping Kritters and Klaptraps.

Stage swapped with Orang-utan Gang in the Game Boy Advance version of the game Donkey Kong Country.
Clam City is the second underwater stage in the game. There are many Clambos, clam enemies which spit out one or more pearls at straight directions. Each of these enemies shoots its projectiles at specific patterns and regular intervals. Enguarde the Swordfish can be found inside an Animal Crate in a hidden alcove after the beginning of the stage. However, the Animal Buddy cannot harm Clambos either. Groups of Bitesizes, Chomps Jr., Chomps and Croctopuses are also common aquatic enemies here.

This boss stage also takes place nearby banana hoards. Queen B., a giant bee boss, will face the Kongs here. Like regular Zingers, the primates must avoid any direct contact with the boss. In the SNES and GBC versions of the game, Queen B. will just fly around the edges of the arena in clockwise or counter-clockwise direction. However, in the GBA version, she will pursue the heroes actively by flying up and down. In order to harm Queen B., the Kongs must pick a Vine Barrel up from the ground and throw it at her. After being hit, Queen B. will become red and invincible temporarily in the SNES and GBC versions. She will also pursue the primates by moving up and down constantly, forcing them to avoid her until she returns to the regular colors and the flight pattern around the arena. However, in the GBA version, Queen B. will become invincible after being harmed, move to the right side of the arena, summon a group of five regular Zingers around her, and fly across the location by moving up and down constantly. She will keep the current attack until the heroes have defeated all Zingers by using new Vine Barrels, making her vulnerable against the barrels again afterwards. In all game versions, Queen B. will be defeated after receiving a total of five hits, and the Kongs will be rewarded with a Giant Banana.

After that, the player will gain access to the fourth world, Gorilla Glacier, on the overworld map of the Donkey Kong Island. 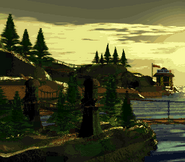 The first half of the world map of Vine Valley as seen in the game Donkey Kong Country for SNES. 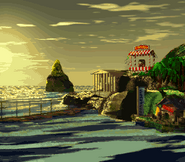 The second half of the world map of Vine Valley as seen in the game Donkey Kong Country for SNES.

The world map of Vine Valley as seen in the game Donkey Kong Country for GBC.