"I can't believe it, you trampled all over Gnawty."
—Cranky Kong

Very Gnawty is the first boss of Donkey Kong Country. He is fought at the end of Kongo Jungle, in the stage "Very Gnawty's Lair."

Very Gnawty is a larger version of a regular Gnawty, but it differs from the regular Gnawties because it has the ability to jump. In the Super Nintendo Entertainment System version, he was green, as per the regular Gnawties in that version; however, in its Game Boy Advance remake, it was re-colored red (which was Really Gnawty's color in the SNES version).

Being the very first boss of Donkey Kong Country, Very Gnawty does not pose that much of a threat. When the battle starts, the Kongs will automatically break open a DK Barrel so the battle begins with both Kongs. 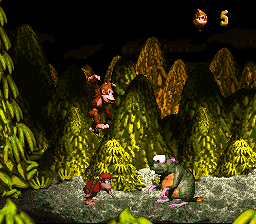 Very Gnawty will then approach the monkeys with small hops. To defeat Very Gnawty, simply jump on its head five times. 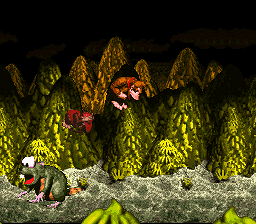 After each hit, Very Gnawty looks towards the screen and laughs oddly (as if to mock the player) and, as the battle goes on, jumps farther and faster, increasing the difficulty until the fifth hit, where it falls to the ground in defeat. 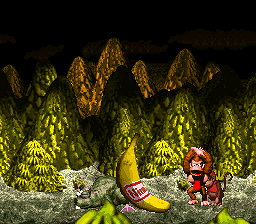 In the Game Boy Advance remake, the battle with Very Gnawty is nearly the same; however, the boss is nearly twice as large as Diddy Kong. Additionally, he gets re-colored red when he becomes invincible as he jumps to the opposite side of the screen after getting hit. 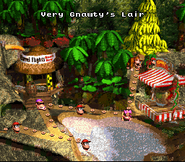 Very Gnawty's Lair in the overworld. 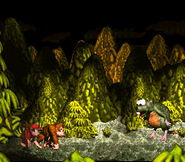 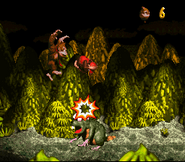 Very Gnawty being jumped on. 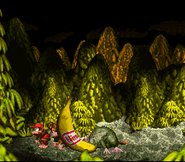 Very Gnawty's Lair in the overworld.

Very Gnawty being jumped on.

Cranky talking to the two after defeating Very Gnawty.

Deutsch
Community content is available under CC-BY-SA unless otherwise noted.