Start a Wiki
Professor Chops and his clones the Tutorial Pigs are types of supporting characters that live on Donkey Kong Island and first appeared in Donkey Kong Country Returns and Donkey Kong Country Returns 3D, as well as Donkey Kong Country: Tropical Freeze. They act similar to a Star Barrel or a checkpoint and, throughout the game, they will teach the player how to use the controls and use certain game features such as the Rocket Barrel. As such, they could possibly be considered an animal buddy of sorts. They also suggest to Donkey Kong and Diddy Kong to use the technology to summon their cloned counterparts Super Kong and Super Diddy in the Super Guide mode when they lose eight lives (or five lives in the 3DS version New Mode) in the same level and only in single player mode. Tutorial Pigs also appear in other sections of the levels, indicating the Kongs should press buttons to do certain actions. The pig's appearance is very simple.

Professor Chops is very intelligent, has Einstein Pig glasses, and small, crunching teeth. He also appears during Time Attack mode, marking the start and finish lines for the Kongs. 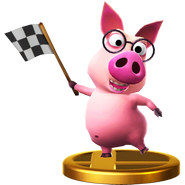 Tutorial Pig's Trophy in Super Smash Bros. for Wii U.
Add a photo to this gallery

Retrieved from "https://donkeykong.fandom.com/wiki/Tutorial_Pig?oldid=65566"
Community content is available under CC-BY-SA unless otherwise noted.