Start a Wiki
Tiptup the Turtle is a turtle character that appears in Diddy Kong Racing and most of the Banjo-Kazooie games. Despite Banjo and Conker being scrapped out of Diddy Kong Racing DS due to both series being owned by Microsoft, Tiptup wasn't taken out.

This seems to confuse most fans, the likely explanation is that it's due to him not being a promotional character for Microsoft or the Xbox (unlike Banjo and Conker), another is him using his Diddy Kong Racing design rather than his drastically different design in the Banjo-Kazooie games, additionally Tiptup is only a supporting character rather than the main character of his own series like Banjo and Conker.

Nintendo and Rare/Microsoft could not being bothered to change the designs of Banjo and Conker so they decided on a more simple solution; that being to replace the two with Tiny Kong and Dixie Kong respectively. 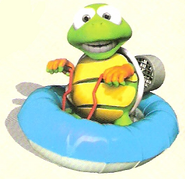 Diddy Kong Racing DS
Add a photo to this gallery
Retrieved from "https://donkeykong.fandom.com/wiki/Tiptup_the_Turtle?oldid=62080"
Community content is available under CC-BY-SA unless otherwise noted.