This level is set in a forest where Totem Poles are the main platforms. These Totem Poles move up and down in a diagonal fashion. However, they do not make a steep angle, so the Kongs cannot fall off them if stationary. However, some of the Totem Poles travel from side to side and then fall down. There are a few totems that try to crush the Kongs too. Common enemies here are Squeeklies, Chomps, and Tiki Goons.

The level begins on wooden platforms surrounded by trees. In the tree trunk behind the Kongs is a hidden area with a Banana Coin, while ahead is a yellow Chomp shooting spores at the edge of the platform. Three tilting totems are in a large abyss after this, being followed by a solid platform with a Squeekly flying over it. Plants that hold items and a spring that can be released from the ground by pounding on it are on the platform. The spring can help them reach another platform hidden in the canopy with a Banana Coin on it. Another totem is tipping in a nearby gap, and ahead of it is a platform with three Squeeklies flying towards it. Two totems are in the gap after this, helping the primates reach an area with two platforms separated by a small gap with some leaves in it. A spore-shooting Chomp and the letter K of the K-O-N-G Letters are above the gap. If the heroes jump in this gap, they land in a hidden area behind the canopy with Banana Bunches and a Puzzle Piece. The edge of the second platform has a Tiki Goon, who stands near a large abyss with more totems in it. The totems move across the wide gap, so the Kongs can ride on them to progress. Bananas are above the totems in a long line. When the totems begin to fall, they can find a tilting platform with some Squeeklies flying around it. Three stationary pillars are placed in a gap nearby with Tiki Goons on each of them. The Tutorial Pig waits at the checkpoint on the following platform on the other side of this abyss.

There is a large, Tiki-like pillar after here that opens and closes its mouth repeatedly. When it opens it, a passage is made to the next area for the duo to go through, but when it closes, they can get crushed if in it. The following platform is slightly longer than the previous platforms, although it holds nothing but a single plant that the Kongs can blow on. Another giant abyss is farther ahead, with totems moving in it. The Kongs must jump along the totems, moving quickly so that they can travel forward, as the totems are moving the opposite way they want to go. Bananas and Banana Bunches are placed above the totems. A tilting platform stands at the end of the abyss, aiding Donkey and Diddy in reaching a tunnel area full of small, pillar-shaped platforms and many spore-shooting Chomps. The letter O is near the beginning of this area above a thin platform with a spring on it. The spring can only be released from the ground of it is pounded on. Plants, some of which that contain items, are on some of the platforms as well. Another tilting platform is outside of the tunnel area with a Bopapodamus and a two totems after it. Squeeklies fly around here, and the two totems can help the Kongs access a solid platform with the Tutorial Pig and the checkpoint on it.

An abyss with a tipping totem in it follows the checkpoint. A stationary platform is after this that is placed next to a fan-like object connected to a giant pillar that takes up almost half the screen. If the primates blow on the fan, the pillar opens to create a passage for them to travel through, before the pillar closes the passage and crushes them if they are in it. Four totems tip in an abyss ahead of this pillar that are followed by some darker totems that can move across the rest of the wide abyss. The can lead the two heroes to the letter N high in the air and a bigger, tilting platform that Squeeklies fly past. More moving totems are ahead of this platform. They travel across a large abyss, bobbing up and down on the way. Ceilings covered in green, grassy turf are above the totems that have plants growing in them that contain items. The heroes can grab onto the turf and break open the plants to reveal the items. Eventually, the duo can reach a turf-covered ceiling that they can climb along to reach a platform with a DK Barrel on it. Next to the barrel is a plant that contains an item, while above it around the canopy is the letter G. A group of four bobbing totems follow this platforms, and a tilting platform with Squeeklies flying around it is after them. Five Bopapodamuses that the Kongs can bounce on and many bananas are also ahead. The last hippo obstacle bounces them onto a solid platform with a giant button on it. Hitting it five times makes a pillar nearby open to reveal the Slot Machine Barrel above a hole; hitting this barrel makes the level complete. 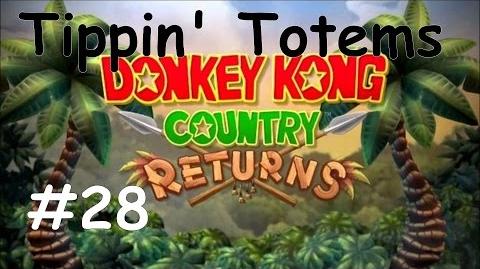