Tiki Tong ordered all the other tikis to steal Donkey Kong and Diddy Kong’s bananas from their hoard at the beginning the game. Upon their arrival, he will have his minions throw all of the Bananas into his head, where he then blends them into a liquid which he spews on his minions, merging them into his hands.

Tiki Tong must be reached by going through a vertical Rocket Barrel section to the top of the Tiki Tong Tower. Here, the Kongs must dodging the tikis in their airships, and other obstacles, such as flaming machinery. Pressing and holding the "Jump" increases the rocket's speed and allows the player to reach the top of the screen and move quickly around the faster obstacles.

After reaching the top of Tiki Tong Tower, the primates must fight Tiki Tong, himself. He eats DK's banana hoard and spits the juice on his minions to mold them together to power himself up, creating a pair of giant hands. During the boss battle, Tiki Tong must be hit seven times to be beaten (two times on both hands and three times on his head). The places to hit are crystals on the back of his hands and the middle of his head. He will use a set of attacks:

His appearance is that of wood, with hands formed out of DK's bananas and the other leaders of the Tiki Tak Tribe. He has black eyes with red pupils. He also has large nostrils. He also has red and blue markings all over his face/head level.

Tiki Tong appears as a trophy in the game Super Smash Bros. for Wii U. 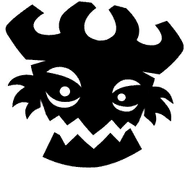 Tiki Tong's silhouette seen at the screen when the Kongs are defeated in any levels of the Volcano world in both games. However, unlike the other Tiki Tak Tribe leaders, it is only shown after he is first meet by the primates.

Tiki Tong's statue at the beginning of the Volcano level Roasting Rails, as seen in the game Donkey Kong Country Returns for Wii. 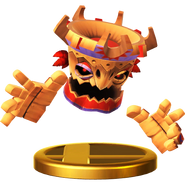 Tiki Tong's trophy as seen in the game Super Smash Bros. for Wii U.