The Tiki Boulder is a giant tiki enemy from the games Donkey Kong Country Returns and Donkey Kong Country Returns 3D. It is only seen in the sixth Cliff level, Crumble Canyon, about halfway through the level. The Kongs will come to a large chasm that has the Tiki Boulder, resting next to it with its eyes closed. Once the heroes step on its head, fire will spew from its mouth and eyes, a sign that it has clearly been awakened and enraged. It will then begin to roll towards them, crushing any enemies, barriers and walls. If it reaches the primates, the Tiki Boulder will instantly defeat them. Whenever the the enmey lands from a slight fall, it will close its eyes. At the end of the level, it will roll off an edge and drown in the tar pit.

The Tiki Boulder has a large golden crest on its forehead, and eight spikes lining his body. Its mouth seems to open and close in a way similar to Pinchlies and Snaps. It has a few other minor designs as well: its inner body will glow orange, possibly from the fire generated inside of it. 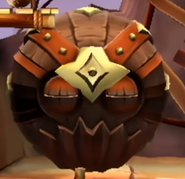