﻿Thugly looks similar to Mugly, an earlier boss from the same games, except he has hot plates on his back (similar to those on an armadillo). His teeth are sharper and he is purple. His eyes are also smaller and red, and he has sharper horns. Thugly has markings on his arms and back, that look like thunderbolts. He has large, burly eyebrows, and a small snout. The front part of his head overlaps his jaw. Thugly also has a white underbelly, with a small marking underneath. Another large factor is his huge, red horns, which are his main means of attacking.

Initially, the player must go right and throw the DK Barrel to summon a second Kong if necessary. Jump into the barrel cannon to be shoot upward and start a cutscene. Donkey and Diddy Kong will blast up into a lair in the mountains, and soon they will notice Thugly munching their bananas. Suddenly the Tiki Tak Tribe will appear in airships, and Xylobone will hypnotize and possess Thugly to fight the primates, starting a battle.

The boss battle is very similar to Mugly's and it is also composed by three phases. Thugly will start by trying to run towards the Kongs and munch them. The player must jump over the monster to make him skid and his backplates to retract for short time. The primates must quickly jump on the exposed back to land a hit. Sometimes, if the player fails to landing a hit, the boss will immediately change directions and repeat the same attack. Avoid to touch the backplates when they are incandescent at any costs. It indicates the plates are hazardous for the heroes. Now Thugly will ram and crash against a wall, making two rocks to fall from the ceiling, while staggering backwards and randomly falling onto his back dizzy. The player must avoid the boss and the rocks, and try to land a hit by jumping on the creature's belly after he falls. After that, Thugly will make a large leap, trying to land over the Kongs and releasing a harmful shockwave across the ground. The player must also avoid the boss and the shockwave. The boss will keep repeating this same pattern and order of attacks constantly. After receiving three hits, Thugly's skin will become orange. The boss will leap high and land in the middle, breaking the main platform and dropping everybody down to a small, wooden bridge. It will start the second phase.

In the second phase, Thugly will follow the same pattern of attacks from the first one, but he will add an attack of shooting a wide stream of fire (like a dragon) that extends all the way across the arena. The player must duck under the fire to avoid it. The boss will also become faster and more agressive in his attacks. After taking three more hits, Thugly's skin will now become red, and he will leap high and slam onto the middle of the bridge, breaking it and moving all characters to the very bottom of the arena, where bones lay. The third and final phase will begin now.

Once again, Thugly will circle through the same pattern of attacks from the previous phase, but he will now start by spitting a large fireball towards the opposite side of the arena. The fireball will randomly split into multiple smaller ones while in the air, making harder for the player to avoid them. After receiving three more hits, the boss will be defeated. Thugly will pass out and Xylobone will leave the creature's body. The player can punch the Tiki Tak Tribe leader multiple times or let it ran away. Either way, the boss level will be completed, and the Factory world will become accessible now.

Thugly appears as a trophy in the game Super Smash Bros. for Wii U.

During the second phase, Thugly breathing fire at Donkey and Diddy Kong, as seen in the game Donkey Kong Country Returns for Wii. 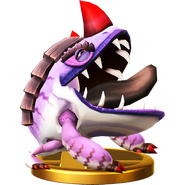 Thugly's Trophy as seen in the game Super Smash Bros. for Wii U.