This level is the second to feature Rambi the Rhinoceros. Only with the help of Rambi, Donkey and Diddy Kong can crash through spikes and stone walls. Near the end of the level, the rock pathway begins to crumble and fall, forcing the heroes to move fast. Luckily for the Kongs, the pathway does not fall down if they stay in the air by jumping on enemies. Other obstacles in this level include red and bouncy flowers and fiery rings that Rambi can jump through for extra items. The level enemies consist mainly of Tiki Tanks, but there are also some Hopgoons and Tiki Bombers.

The level begins by a bridge that leads to a DK Barrel. The Kongs must jump over the elevated platform to the left, jump the next one, going past the Tiki Tank and inside the barrel cannon. The barrel will take the primates through more barrels to collect many bananas and the first Puzzle Piece. After landing on another bridge, there are some enemies ahead, and stair-like platforms that leads to some spikes. Another Tiki Tank is after these spikes, and another is in a pile of spikes in a lower area. Another group of spikes is nearby but it can be crossed by using a platform that is right above it. The Kongs can find an Animal Crate after these spikes. If they break it open, they can find Rambi the Rhinoceros. Mounted on Rambi, they can charge through a long area of spikes that cannot be safely crossed without the Animal Buddy. Backtrack a bit and pound on the flat platform in the spike trap to reach the letter "K". Go back all the way to the beginning of the level, past enemies and spikes, to find and destroy a stone block with Rambi's simbol and collect the second Puzzle Piece behind a waterfall. Going forward from Rambi's crate, there is a bridge with a Tiki Tank on it farther ahead, as well as a large stone walls that Rambi can smash through. Spikes are placed after this, leading to an urn that can be broken open to reveal a Banana Coin. After it is a slanted bridge with a fiery ring above it. Rambi can jump through this ring to gain some bananas. Some toppling platforms supporting stone walls (in which Rambi can smash through) can be found nearby, leading to the letter "O". The wall next to the letter cannot be fully moved, and when Rambi hits into it, the wall only budges and pushes the heroes backwards, causing them to land in the gap below the letter "O". In the gap, there are many large, stone blocks. Rambi can smash through these blocks and below them there is a flat platform. Ground-pounding the platform will break it and allow the primates to reach the entrance of a Bonus Room. In the room, the heroes must use the bouncy and moving platform to collect all forty bananas and four Banana Coins within thirty seconds and make the third Puzzle Piece to appear. After the Bonus Room, the Kongs must go though more blocks down a hallway leading outside of the temple to reach the Tutorial Pig at the checkpoint.

About halfway through the level, the primates can find a solid rock pathway leading under a platform with a Tiki Bomber on it. Hopgoons also hop in the heroes' way down the pathway. After the first Tiki Bomber and some Hopgoons, the Kongs must ground-pound nearby the yellow plant to reveal the fourth Puzzle Piece. Moving on and after a second Tiki Bomber on high platform, the rhinoceros must aid the primates in smashing through a rock wall and a statue. When he hits into a statue, the base forms a small bridge, which Rambi and the Kongs can use to travel over a small gap. If the Kongs continue down the rock pathway after this gap, they come up to some Tiki Tanks and finding another DK Barrel. A bouncy and red flower is located after the barrel to help the Kongs progress and reach the letter "N". Farther ahead are some large, hanging structures that Rambi can break, along with some spikes with a Tiki Tank in them. Rambi can charge through the spikes and smash through some more Tiki Tanks on the following rock pathway to get to some more bouncy flowers. Many bananas and a fiery ring are above these flowers. After passing a fountain seen in the background, Rambi can hit the base of another statue to create another bridge leading to the second Tutorial Pig with the checkpoint.

A rocky pathway of a darker color than the paths before is farther ahead. When stood on, it begins to fall. Rambi must race across this pathway while smashing into some Tiki Tanks and walls on the way. A solid area is not too far away from here, so Rambi and the Kongs can stay here without falling. An urn can be found in this area with a collectible in it as well. More toppling rock pathways are after this, and many gaps are between the platforms. The letter "G" is between two of these falling platforms, and some Hopgoons and Tiki Tanks are on them as well. Eventually, the heroes make their way into a wall that Rambi can smash through to reach an area of smaller falling platforms. The rhinoceros must continue to run fast while jumping over many small gaps and through a fiery ring that gives bananas when jumped through. After the group dashes over a long and tumbling platform, they can reach solid ground again, where the Slot Machine Barrel is located. Ignore it for now. Go nearby the urn and ground-pound to reveal the fifth and final Puzzle Piece. After the Kongs hit the Slot Machine Barrel, the level is complete.

The puzzle of Temple Topple is of a strawberry against a light green background. When all of the pieces are found, the Island Vista artwork will be added to the Kong Gallery of the Image Gallery in the Extras menu. 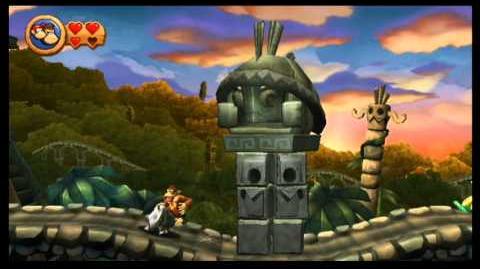