Swanky's Sideshow was a circus-themed attraction featured in every area of the Northern Kremisphere, except for the lost world Krematoa, in the game Donkey Kong Country 3: Dixie Kong's Double Trouble! and is a successor to the previous game's Bonus Bonanza. Swanky Kong runs his sideshow, and he is clothed differently than in the last game.

Swanky's Sideshow is a circus-themed attraction that can be found in every area of the Northern Kremisphere (except for the lost world Krematoa). The attraction itself is divided into three different target-breaking minigames where Dixie and Kiddy must throw balls at targets in a row in order to knock them over. There are three different ways to play, though all versions require a payment of two Bear Coins. Upon winning, Kongs will receive four Bear Coins and some Banana Bunches.

Cranky Kong makes his only appearance outside the ending of DKC3 in the Super Nintendo version, where he would play against the Kongs. He makes the usual ranting and comments if he wins or loses.

In the Game Boy Advance remake, it was replaced with Swanky's Dash, a fast-paced virtual reality game.

This version has Kongs face Cranky in a race to hit the most targets. With each hit on a target, the Kong gets happier and the "happiness meter" will go up. The happiness meter decreases every time Cranky hits a target. The goal is to make the happiness meter reach the maximum height, before it sinks to it's lowest.

In this game, both participating Kongs must throw as quick as possible to achieve 25 hits on the targets first.

Here, the Kongs must simply hit every target that pops up. Missing one automatically declares your opponent the winner. 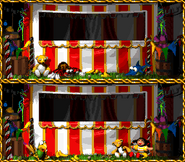 The background for where the Kongs compete against Cranky.

sprite of a target