Super Smash Bros. for Nintendo 3DS and Wii U

Note: This article of Super Smash Bros. for Nintendo 3DS and Wii U is centered around the Donkey Kong franchise. For more in depth information on both game versions, please visit the related article on Smashpedia.

Donkey Kong returns as a playable character. He is available from the start, and is a heavyweight character. He's received a lot of new changes since Super Smash Bros. Brawl. Most of his moves are borrowed from previous games in the series, but some of them were changed in some way. Donkey's design has been slightly updated. He received new facial expressions, such as his eyes bulging out when he is launched by an opponent, which is a reference to Donkey Kong Country. His moves in general are much more fluid than they were in previous games in the series. Mechanic wise, Donkey Kong walks and runs faster, and he is heavier too.

Diddy Kong makes a return as a playable character from the game Super Smash Bros. Brawl, making it his 2nd appearance in the series. He is a default character, and retains most of his moves from Super Smash Bros. Brawl, with some changes here and there. His design has received minor changes, such as the colors on his body being more vibrant. Diddy's limbs can stretch farther similar to Lanky Kong.

Across the two games, the Donkey Kong series has four stages represented. One on 3DS version, and three on Wii U version.

This is a past stage from the game Super Smash Bros. Melee. It appears to be based on Donkey Kong Country and Donkey Kong 64. The stage has four platforms, and a water current below the stage. Fighters will get dragged through the current, and get KO'd if they do not jump out in time.

Oddly enough, out of the two possible music tracks on the stage, the Jungle Japes theme originally for the stage is not one of them. Instead, the main music theme is "Kongo Jungle", which is the track that played on the Kongo Jungle stage from the original Super Smash Bros. game. The alternative track is a remix of "Gear Getaway" from Donkey Kong Country Returns.

This a new stage based on the game Donkey Kong Country Returns, and is exclusive to the Wii U version. The main gimmick of the stage is jumping into barrel cannons, and being blasted off into the foreground and back background. This is the very first Smash stage where fighters can fight in the background.

This is a returning stage from the original Super Smash Bros. It based on the game Donkey Kong Country, and it can be unlocked by clearing "The Original Heavyweights" event in Events mode.

* = This song can be unlocked by getting chain of 200 on Trophy Rush with Donkey Kong.

References to other Donkey Kong games 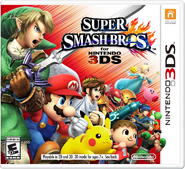