In the single player mode, after the player loses eight extra lives, or five lives during the New Mode of Donkey Kong Country Returns 3D, inside the same level, the Tutorial Pig will appear sitting on his stalls brandishing a white flag constantly at the beginning and each checkpoint of the current location. It will happen even after the checkpoints being activated by the player. By the Kongs approaching the checkpoint stall, a speech bubble will appear over the Tutorial Pig displaying a button prompt. If the player press the button displayed, a message box will offer the option of activating the Super Guide mode, where the Super Kongs will be summon in order to clear the current level. By picking the option "Yes", the current level will start from the beginning, and the Super Kong (resembling Donkey Kong) will proceed to complete it, while the player watches it. If the Super Kong comes across a DK Barrel during the level, he will summon Super Diddy as an assist character. If the player pauses the game during this mode, they can take control over the Super Kongs. Both characters behave the same way as their regular counterparts. It is not possible to lose extra lives in the Super Guide mode. However, any collectables get by the Super Kongs, including bananas, Banana Coins, Extra Life Balloons and Puzzle Pieces, are not considered collected by the player during the same mode, even after they take control over the characters.

Boss levels and Key Temples can also be skipped by the player using the Super Guide mode. However, the same mode cannot be activated in the level Golden Temple. The button prompts for summoning the Super Kongs over Tutorial Pig's stalls only disappear after the player clearing the current level once in the regular mode. And the same mode can also be triggered even inside levels already cleared by the player.

Both characters have the exact same shape and size of Donkey Kong and Diddy Kong, respectively, except that they have white fur and wear blue clothes, instead. The Super Kongs move in the same way, and they make the same sounds and movements as the regular Kongs.

Super Kong during the Super Guide mode as seen in the game Donkey Kong Country Returns for Wii. 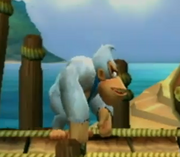 Closer view of the Super Kong as seen in the game Donkey Kong Country Returns for Wii.