Stu has red feathers all over his body. His wings are mainly red, but also end in yellow and blue, as well as red again, which resembles a parrot. His feat are blue and have white talons. He has blue eyes with pink eyelids. His beak is long and yellow, sporting two nostrils. His headdress is made of gold, and has a rhombus-shaped red jewel. The headdress also has seven spikes in the back, and seven in the front. Stu's golden cauldron has a menacing looking face, itch large eyebrows, mouth, has rims on the sides, and multiple engraved symbols. It has a curve in the middle that resembles a beak. It also has four spikes in the back, with two on each side.

Go towards right and use the DK Barrel if needed. A cutscene will start showing Gong-Oh getting a big egg. Two monkey statues will hit a giant gong, destroying the stone platform and dropping the Kongs below. Gong-Oh will throw the big egg into a golden cauldron and possess it. The large bird Stu will hatch and attack the Kongs.

Stu is fought in a large square room, with some pillars on the bottom. He flies around at the top of the screen, throwing regular bombs and sometimes incendiary bombs down towards Donkey and Diddy Kong, occasionally diving down and trying to hit them with up his talons. The Kongs must pick up and throw bombs back at the bird in order to defeat him. After he takes three hits, Stu will drop a missile, leveling some pillars and starting the final phase. At this phase, Stu will become more aggressive, throwing Tiki Pops and even eight randomly timed bombs at the Kongs. After receiving  three more hits, he will be defeated.

A cutscene will show the cauldron breaking apart and revealing a pink, bulbous body as Donkey and Diddy Kong turn away in disgust, covering their eyes. As soon Stu passes out, Gong-Oh will come out dizzy. After the cutscene, the player can beat multiple times the Tiki Tak Tribe leader or let it get away. Either way, the Cave world will become accessible.

Stu appears as a trophy.

NA: In the Ruins area, Gong Oh Tiki puts a mysterious egg into a golden cauldron and then jumps in after it. Five seconds later, the newly hatched chick breaks holes for its wings and legs and takes to the air. When Stu chucks bombs from his cauldron, pick them up and return the explosives to him. It's only fair, right?

PAL: Deep within ancient ruins, Tiki shaman Gong Oh drops an egg into a golden cauldron, and magically causes it to hatch. Out of the egg pops Stu, his wings and talons busting through the cauldron. He's got bombs in there, and he loves to throw them. Chuck them back at him before they explode! 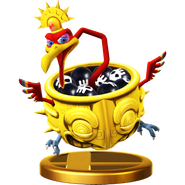 Stu's Trophy in Super Smash Bros. for Wii U.