Squirt is the third boss from Donkey Kong Country 3: Dixie Kong's Double Trouble!. Squirt was a very odd boss, as he looks like a gigantic slug head. He dwells behind a waterfall for the whole battle. To defeat Squirt, the player must shoot his only weakness, his eyes, with water.

Squirt is fought at the end of Cotton Top Cove, in his level called Squirt's Showdown. In the battle, Squirt, as his name suggests, can squirt water from his mouth and uses this as his projectile attack. The Kongs will turn into Ellie upon entering the battle. The arena has six platforms, three on each side. Ellie must absorb the water from the waterfall and shoot the water at Squirts eyes. Squirt will be trying to knock Ellie off the platform by squirting water at Ellie, or in the Game Boy Advance remake, he will spit out water in a circle-like motion. Ellie, not being the most agile, will have some trouble in this battle.

In the Game Boy Advance remake, the stage was made slightly smaller (compared below), and was given a brighter color. The water appears to have a purple hue as well. 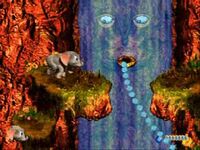 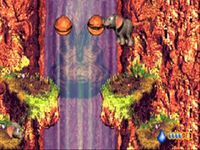