Squeeklies are bat-like enemies that appear in Donkey Kong Country Returns and Donkey Kong Country Returns 3D that are located in the Cave world and they can be found in most dark areas of the Donkey Kong Island. The Squeeklies' main attack is to flying towards the Kongs and hit them. Squeeklies can be defeated by a simple jump or having a barrel being thrown at them. In some situations, the player can defeat them by rolling right into them, however, some Squeeklies tend to fly higher than others, thus making them harder to reach.

Blue Squeeklies are the most common and can be found in many levels of the games, particularly Cave world levels. However, they can also be found in certain levels of the Forest. They will only fly in a straight path continuously, but can be defeated by a barrel, a roll or jumping onto them. At some occasions, the Kongs may to use the Blue Squeeklies as "stepping stones" to bounce off and avoid hazards and pits. These enemies also appear in the Beach Key Temple level, Tumblin' Temple, and in the Cloud level Mischievous Moles, the latter one as exclusive to Donkey Kong Country Returns 3D. This is the only Squeekly variant that has a nose shape rather than two nostrils.

The Purple Squeeklies are a type of Squeekly only found in the Cave level Crowded Cavern. They are first seen sleeping altogether but are angered when Donkey and Diddy Kong are forced to wake them by igniting the Rocket Barrel. This causes them to try and make the Kongs crash by flying in front of them in groups of two to six and explode the Rocket Barrel. The only difference between the Purple Squeeklies and the blue variant is that they have different eyes, and this variant has two nostrils rather than a nose shape.

The Bobbin' Squeeklies are a much larger variant of the Blue Squeekly, but are only seen in the Cave level Crowded Cavern, where they are accompanied by Purple Squeeklies. They do not attack the Kongs directly, rather choosing to slowly bob up or down the screen, possibly trying to block the path of the primates' Rocket Barrel. They seem to make a sound as they rise. And their appearances are similar to Blue Squeeklies.

Mega Squeekly, also known as King Squeekly, is the largest and leader of the Squeeklies. He is only seen in the Cave level Crowded Cavern, where he and his underlings are awoken by Donkey's and Diddy Kong's Rocket Barrel, and enraged to the point that they attempt to chase the heroes down and destroy them as revenge. He periodically throughout the level is seen in the background, or peeking around things, and will eventually attempt to chase the Kongs down, chomp them by breaking through wooden walls and even firing sonic waves from his mouth. He is capable of firing a large amount of them at the primates, and as a last resort, an extremely large beam that spreads across the screen for an extended period of time. The level ends when he accidentally collides with a large crystal cluster that causes him to ricochet into the ceiling, landing him on his head, where he will skid across the cave floor until he comes to a stop at the large deck that the Slot Machine Barrel at the end of the level resides over. He later can be seen in the background of Blurry Flurry in Donkey Kong Country: Tropical Freeze, where his body is seen frozen in an enormous chunk of ice. 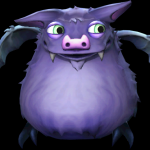 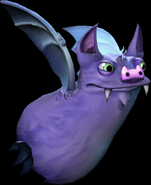 Donkey Kong waking up the Squeeklies.

The Kongs dodging Purple Squeeklies with the Rocket Barrel.