Squeals on Wheels is the third stage in Kremwood Forest and the eighth stage in Donkey Kong Country 3: Dixie Kong's Double Trouble!.

This stage takes place inside of a mill and mainly focuses on Sneeks whom need to be defeated via Steel Kegs in order to defeat them and advance through the closed doors. The stage's exit is next to the start, but has a door blocking it and needs advancing to open up the door.

Sneeks, Buzzes, Re-Koils and a lone Booty Bird are located in this following area. It also has the debut of a new Animal Buddy; Parry the Parallel Bird. 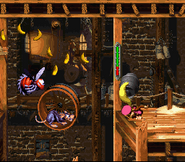 Dixie about to attack a Sneek. 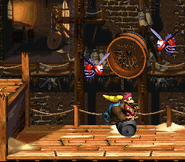 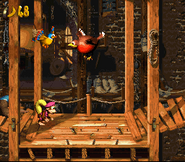 Dixie and Kiddy leading Parry throughout the stage.
Add a photo to this gallery

Kiddy about to throw a Steel Keg at a Sneek.
Add a photo to this gallery
Retrieved from "https://donkeykong.fandom.com/wiki/Squeals_on_Wheels?oldid=58243"
Community content is available under CC-BY-SA unless otherwise noted.