Not to be confused with his purple counterpart, Quawks the Parrot.

Squawks the Parrot is an animal buddy who helps the Kongs through the Donkey Kong series. He first appeared in the game Donkey Kong Country.

In the original Donkey Kong Country game, Squawks only appears in the Gorilla Glacier stage Torchlight Trouble. Once released from his crate, Squawks will follow Donkey and Diddy Kong through the pitch-black cavern. Armed with a bright lantern, Squawks lights up the surrounding area, allowing the Kongs to see ahead and traverse the dark stage. In the same stage of the Game Boy Advance version of Donkey Kong Country, Squawks is not released from an animal crate. The parrot just appears at the beginning of the stage.

He is first found in the stage Squawks's Shaft, which is named after him. In some stages of Donkey Kong Country 2, Squawks is released from a crate. Squawks will then carry his primate allies through the stage, until reaching a No Animal Sign. In Donkey Kong Land 2 and other stages of Donkey Kong Country 2, the heroes will directly transform into Squawks by using his Animal Barrel. Additionally, it is interesting to note that Squawks will not fly away when hit by an enemy. Instead, one of the Kongs will drop from his claws when he is carrying them. Squawks remains playable as long as a second Kong remains safe. As such, Squawks controls the same regardless of whether he is released from a crate or the Kongs are transformed into him. However, when carrying the heroes in Donkey Kong Country 2, Squawks flies much slower than when the primates transform into Squawks, as the parrot is obviously slowed down by the Kongs' weight.

Squawks is also the first animal buddy to take part in a boss battle. In Donkey Kong Country 2 and Donkey Kong Land 2, Squawks has to fight the leader of the Zingers himself, King Zing. In the Krazy Kremland boss stage King Zing Sting, the primates turn into Squawks to fight against the massive bee.

In Donkey Kong Country 2 and Donkey Kong Land 2, during the second half of the stage Screech's Sprint of The Flying Krock world, the Kongs must transform into Squawks and race against Screech, an evil-looking parrot. In order to win the race, the player must maneuver Squawks around dangerous brambles and many Zingers. By losing the race, Squawks will be defeated at the spot, and the player will lose an extra life.

In Donkey Kong Country 2, Squawks has multiple purple counterparts named Quawks the Parrots. They only appear in the stage Parrot Chute Panic of the Gloomy Gulch world. Unlike Squawks, Quawks cannot spit eggs out of their mouths or fly upwards. These purple parrots' ability in this game is only to help the Kongs to descend at certain speed and traverse the stage while avoiding enemies.

Squawks remains unchanged in the games Donkey Kong Country 3 and Donkey Kong Land III, respectively. Quawks also reappears in Donkey Kong Country 3 as a single uncommon animal buddy who possesses most of Squawks' abilities, including the ability to fly upwards. The only difference is that Quawks cannot spit out eggs, but he can lift up barrels with his talons and drop them, as opposed to Squawks.

Strangely, Squawks returns to a smaller size in the game Donkey Kong 64. By exhibiting the capacity of speaking full sentences for the first time, it is Squawks who informs Donkey Kong about King K. Rool's return, how Donkey's banana hoard was stolen and the other Kongs were kidnapped by the Kremling Krew. In this game, Squawks fulfills a variety of roles. He acts as a guide and provide information to the heroes, he carries Tiny Kong in his claws if the young Kong shrunk herself, and he carries a lantern in dark caves (just like in the original Donkey Kong Country game).

Squawks appears as an item in the racing game Donkey Kong Barrel Blast.

Squawks also appears as an item in the games Donkey Kong Country Returns and Donkey Kong Country Returns 3D. He can only be purchased from the Cranky Kong's Shop for fifteen Banana Coins or five coins in the New Mode of the Nintendo 3DS game version. After the player selecting a level, Squawks must be equipped from the Inventory menu for him to be used inside it. He does not carry the Kongs or attacks the enemies as in the previous games, but instead Squawks sits on a little branch at the lower left corner of the screen and become agitated when Donkey and Diddy Kong are near a Puzzle Piece or entrance to a Bonus Room. As closer as the primates get to the collectable or Bonus Room, more agitated the parrot will become, and he will start to squawk. Squawks will no longer to react to Puzzle Pieces inside or outside Bonus Rooms already collected by the player. And even if the player loses an extra life, the parrot will still be present until the heroes leaving the current level. In the New Mode of Donkey Kong Country Returns 3D and the multiplayer mode of both games, only a single Squawks can be equipped at the time. However, the parrot can also be equipped in levels where there are no Puzzle Pieces, such as boss levels, wasting his use for nothing. Squawks cannot be equipped in the Time Attack mode and Mirror Mode of both games.

In the overworld map of Donkey Kong Island of both games, Squawks also appears as the selection marker for worlds.

Squawks appears in the second part of the Club Nintendo comic Donkey Kong Country as an ally of Donkey and Diddy Kong. He is given to them by Candy Kong at her Save Point, and he brings them to a cave. Inside, the two heroes get attacked by a Kritter. With the help of Squawks, who uses his lantern to project Donkey's shadow onto the wall, the primates scare the enemy away. After this event, Diddy and Donkey Kong leave Squawks and proceed.

In Donkey Kong in: Banana Day 24, a comic published in the same magazine previously mentioned, Squawks is seen conducting an "automatic parrot wake-up service" to get the Kongs off their palms in the morning. He uses a microphone and speakers to tell a joke. Diddy calls Squawks a "dumb parrot" and claims that he is telling the same joke every morning. 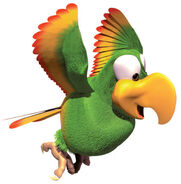 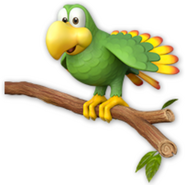 Squawks' sprite from the game Donkey Kong Country for GBA. 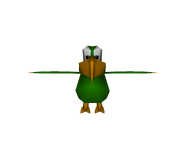 Frontal view of the Squawks' model from the game Donkey Kong 64 for Nintendo 64.