The Snowmads are a tribe of vikings and are the main antagonists in Donkey Kong Country: Tropical Freeze. Hence their name, the Snowmads invade and conquer many islands around the oceans searching for a home they can call their own, like real-life vikings.

The Snowmads first begin their plot of the game confronting Donkey Kong Island as their leader Lord Fredrik blows his horn, creating an Ice Dragon which began to unleash strong, mach 5 level winds, blowing the Kongs away from their island home. The Lord’s ship began to fly, and lands on top of Donkey Kong Island as the Ice Dragon creates a blizzard all over the Island, turning it into a frozen village for the vikings. Although it seems like a wasteland, the Snowmads have made infrastructure of their own, including houses, taverns, and even a fortress seen in Clifftop Climb, as well as Seashore War, where they have many fisheries, all while they have ruined other parts of Donkey Kong Island, such as the Ruins, and have caused multiple caves to become stressed to the point where the slightest loud noise could cause them to collapse. The Forest has been mostly unaltered in appearance, but humongous snowflakes the size of Donkey Kong are there, that can destroy platforms, probably because they have become brittle. The factory has been frozen over, causing it to shut down, and there are multiple parts of the Cliff world that have gotten huge icicles to form. The Volcano has been turned into a hallway leading to the summit of Donkey Kong Island. 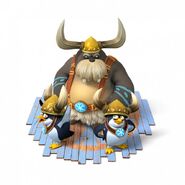 Members of the Snowmads, a Fish Poker Pops and two Pointy Tucks

Community content is available under CC-BY-SA unless otherwise noted.