Skellirexes are found mostly in the Cliff world of the Donkey Kong Island, but they debut first in the Beach Key Temple Tumblin' Temple. They also appear in the Cloud level Tar Ball Fall. Skellirexes usually move back and forward over a platform, patrolling constantly. However, given the chance, they will bite Donkey and Diddy Kong upon contact, harming them in the process. Skellirexes can be damaged by the primates jumping on top of their heads, rolling through them or throwing a barrel at them. If they are harmed once, their bodies will shatter, leaving only their skulls behind, turning into Skullyrexes, skull enemies from the same games, which will continue to leap around randomly, snapping constantly. In this state, they can still bite and harm the heroes, but the random patterns of their jumps can make them to jump off platforms and fall into pits. The Kongs can jump, roll into or throw a projectile at these enemies again, and they will shatter too, defeating them for good. After turning into Skullyrexes, Skellirexes will also become immune against the ground-pound move and the peanuts shot by Diddy's Peanut Popguns.

In the Cliff level Prehistoric Path, there are unique variants of Skellirexes riding on mine carts. They move on the tracks at the same direction or opposite direction of the primates, trying to collide against them. They move at regular speed, and they cannot jump to move between tracks. Similar to other mine cart levels in both games, the heroes will usually be defeated on the spot after a collision with Skellirexes' mine carts. However, the player can defeat these enemy variants safely by the Kongs jumping on their heads once. In fact, by bouncing on the enemies, the primates' mine cart can reach high places, containing inaccessible tracks or collectables.

Skellirexes look like skeletons of small dinosaurs, presumably having perished in the lethal tar pits of their biome during the prehistorical age of the Donkey Kong Island. They possess two legs, two arms and a small tail, being bipeded creatures. Their skulls are oversized when compared to the rest of the bodies. The skulls also have a rounded crest on the top pointing towards the backside of them, making these enemies to resemble parasaurolophus dinosaurs[1]. Oddly, in the conceptual artwork of Skellirexes (see Gallery section below), the crest is missing. 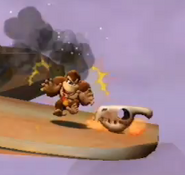 Skellirex after taking damage and become a Skullyrex, as seen in the game Donkey Kong Country Returns for Wii.

Skellirexes riding mine carts in the Cliff level Prehistoric Path, as seen in the game Donkey Kong Country Returns for Wii.