Sea Stack Attack is the fifth stage in Sea Breeze Cove from Donkey Kong Country: Tropical Freeze. It is preceded by Irate Eight and followed by Current Capers. Unlike previous levels in the world, this level takes place entirely on land.

This level features an abundance of enemies that attack the Kongs directly as well as from the background using mechanical traps and Watermelon Fuse Bombs. As implied by the level title, it also contains many sea stacks as platforms, identified by the columns covered with sea shells. If the Kongs make contact with one of these sea stacks, it will slowly begin to sink, forcing them to jump off before it disappears off-screen entirely.

The first jump the Kongs make at the start of the level is onto a sinking sea stack. After crossing two more platforms occupied by Tucks, the Kongs will encounter a Boom Bird in the background throwing Watermelon Fuse Bombs. By picking it up and throwing it at the lone Tucks by the stack of three crates to the right, the explosion will cause them to break apart, opening a way through. Past the opening, the Kongs can use the grass on the ceiling to cross the pit, or jump along the sea stacks underneath it. Two Hot Hootz can be found attacking the Kongs regardless of which method they take. After crossing the gap, the Kongs will find a Fluff in the background operating a wooden paddle covered in spikes that swings left and right and hurts them if they come into contact with it. The Kongs can simply jump over it and pass the first checkpoint.

More spiked paddle traps can be found as the Kongs proceed through the level; the Kongs will first find one above a small bed of spikes, where a DK Barrel can also be found, and another above a sea stack. After the Kongs roll through a pair of Pointy Tucks, they will find a paddle that slams against the ground as opposed to left and right. Using a bomb being thrown by a Boom Bird here, the Kongs can break a giant crate to lower the pillar on top of it, allowing them to enter a Barrel Cannon. While inside the first cannon, three bombs will drop from above and explode in its line of fire. When the Kongs blast into the next one, three more will fly up from the bottom and explode in the same manner. After avoiding the bombs, the Kongs will land on a platform where they must wait for a column to lower and open the way through. During this time, five Boom Birds will throw bombs at the Kongs, which they must dispose of one by one. Once the column is fully lowered, the Kongs can use one of the Boom Birds' bombs to destroy the stack of crates and proceed to the next checkpoint.

The Kongs will enter a Barrel Cannon that launches them to a series of sea stacks. Some of the stacks in this area will abruptly sink down to a certain level before sinking slowly again. After traversing the first series of platforms, the Kongs must cling onto a wide patch of grass to cross the pit, while avoiding the spiked paddles that slam against it, then jump along more sea stacks, now narrower than before. They will eventually reach a series of Barrel Cannons attached to wheels that revolve at set intervals. After entering one of the two cannons on the first wheel, as the ceiling above it is covered in spikes and the Kongs are above a bottomless pit, they must wait for the cannon to point right and for the Blue Hootz to move out of the way, then launch to the next revolving wheel with four cannons. The Kongs must then launch when the cannon is pointed up to enter another short series of Barrel Cannons. While inside the last cannon before the checkpoint, two statues in the background will spout numerous Banana Coins in its launch path for the Kongs to collect.

After jumping across two narrow sea stacks, the Kongs will enter a shelter filled with enemies and traps. Halfway through, they must leap between two sea stacks to cross a wide gap while dodging the spiked paddle directly above it. On the other side of the shelter, the Kongs will encounter a Harold; after defeating it, they can then enter a Barrel Cannon leading them to a tower holding stacks of small red crates, where the Slot Machine Barrel can be found directly underneath. Shortly after arriving, a Boom Bird will throw a Watermelon Fuse Bomb onto the tower, which gradually grows in size. The Kongs must quickly pound through each row of crates to break them and reach the barrel; if they do not do so in time, the bomb will explode and instantly kill them. 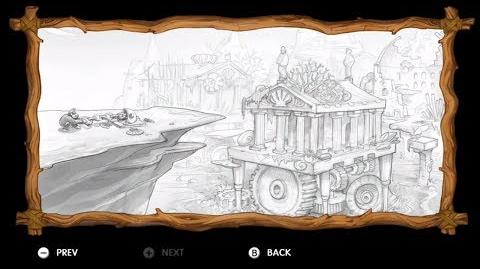