In Donkey Kong Country Returns and Donkey Kong Country Returns 3D, Screaming Pillars' first appearance is in the very first level of the Donkey Kong Island, Jungle Hijinxs. They are also present in some Ruins levels and the Volcano Key Temple Five Monkey Trial. Screaming Pillars are gray stone pillars with sleeping faces seen in the background of levels. When Donkey and Diddy Kong get close, they will wake up, scream and fall down, trying to crush the primates or any enemies close by. If the heroes are unable to avoid the colision, they will be crushed and harmed, and the stone pillars will break apart soon afterwards. By the Kongs avoiding the falling enemies, new stone platforms will be created on the ground. Then the primates can step on the pillars and pound thrice on them in order to destroy them and reveal any collectables inside.

Screaming Pillars also possess giant-sized variants found over pits only in the Jungle level Canopy Cannons and Cloud level Crushin' Columns. These enemies demand the heroes to move forward quickly and avoid them because, after falling down, the giant pillars are capable of defeating the Kongs instantly and also destroying any platforms or barrel cannons below them.

In Donkey Kong Country: Tropical Freeze, there are variants of regular-sized Screaming Pillars called Flaming Falling Totem Poles. They only appear in the Bright Savannah level Scorch 'N' Torch. They are very similar to the regular variants from the two previous games, except for them being engulfed in flames. When the primates approach, Flaming Falling Totem Poles will wake up, scream and throw themselves at the ground. Upon landing and being avoided by the heroes, the flames will extinguish, creating new stone platforms safe for the Kongs to step on. The same platforms will also break down after the primates pound on them thrice, sometimes, revealing collectables inside.

Regular Screaming Pillars appear at the gliding section of the DK Jungle course from the game Mario Kart 7. There, they scream but do not fall, and they try to blow on any racers gliding nearby. In the same course from the game Mario Kart 8 (Deluxe), Screaming Pillars are replaced by their giant-sized variants, and they also exhale some smoke when screaming. 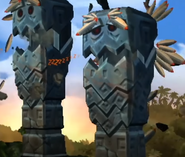 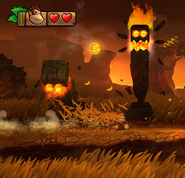