Ropey Rampage takes place in the Kongo Jungle at night during a tropical thunderstorm (just nighttime in the Game Boy Color version or a rainstorm in the Game Boy Advance version). Many of the obstacles in this stage include Kritters, wide gaps, ropes, and barrel cannons. The platforms consist of ground, venturing on trees and occasionally blasting inside of barrel cannons.

Once the player gets near the end of the stage, the thunderstorm ceases and the sun begins to rise; the opposite of what happens at the end of Jungle Hijinxs, where it is daytime and then it turns to night-time. The Game Boy Color and Game Boy Advance versions still have their conditions on night-time and rainstorm. This stage also introduces swinging ropes, Armys and Zingers. Aside from the stage layout, the stage has nine Armys and Kritters along with five Zingers.

When Donkey and Diddy enter this stage, they are greeted with the first appearances of an Army and a TNT Barrel. They can use the TNT Barrel to take out one of the Armys. Above them is a Kritter and the Letter "K," and to the right is a rope they can climb to reach the treetops. Past these treetops are three Kritters with a DK Barrel on a high ledge above them. Following the Kritters is the first swinging rope the Kongs can latch onto and swing. To the left of this rope and on a treetop is the first Rambi token in the game. If the Kongs continue forward, they find another Army and another swingable rope. This rope leads them to more treetops with Kritters and the Letter "O." Under the treetops immediately after the Letter "O" is an autofire barrel cannon that blasts the Kongs into the first Bonus Stage. After the Kritters is another swingable rope that swings the Kongs onto the ground, where the Star Barrel and another TNT Barrel can be found.

Following the Star Barrel are many enemies, including Kritters and Armys. Two Armys await the Kongs if they lose hold of the two swingable ropes after the Star Barrel. After these ropes is another Army, high on a ledge, with a DK Barrel on the ground below it. A Kritter can be seen immediately before another bottomless pit with a swingable rope. The Kongs must swing from this rope, onto a Kritter walking on a treetop, and onto another swinging rope to collect the second Letter "N." A Zinger guards the jump from a singing rope to the ground after the Letter "N." If the Kongs jump far enough past the Zinger, they will release a pushable tire from its item cache, which they can then use to bounce high and land on another item cache containing a Winky token. The remainder of the stage consists of three more swingable ropes with Zingers momentarily blocking the path to each of them. Once on the ground again, the Kongs can access the second Bonus Stage by jumping into an autofire barrel cannon immediately before the arrow sign, above a bottomless pit. The Letter "G" is atop a tree, right above the exit sign. 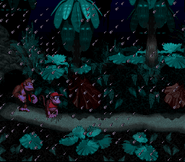 Donkey and Diddy at the start of Ropey Rampage. 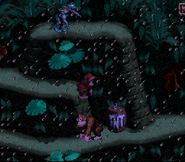 Donkey and Diddy under a Kritter guarding the letter K. 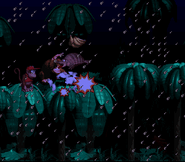 Donkey defeating an Army with his handslap. 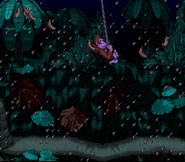 Donkey swinging from a rope. 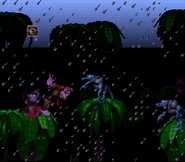 Donkey and Diddy underneath the letter O. 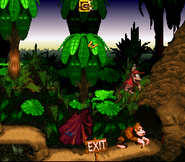 Donkey and Diddy at the end of Ropey Rampage, when it is no longer night and stormy. 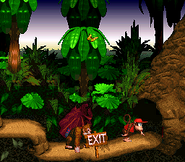 Donkey and Diddy exiting the stage.

Ropey Rampage in the overworld.

Ropey Rampage in the overworld in the Japanese version.

The start of Ropey Rampage.

Diddy swinging on a rope.

Diddy after collecting the letter O.

Donkey under the Star Barrel.

Donkey swinging over a Zinger.

Donkey at the end of Ropey Rampage.

Ropey Rampage in the overworld map.

Donkey and Diddy at the start of Ropey Rampage.

A photograph revealed via handslapping an Army at the start of the level.

Donkey and Diddy next to two Kritters.

Donkey and Diddy next to a pit leading them to a bonus barrel.