This stage is the last stage in Krematoa and all eighty five Bonus Coins are needed to access this stage, so Boomer can destruct the rock blocking the passageway to the stage. In the first half, the Kongs must collect enough Fuel Barrels for the Rocket Barrel, a barrel exclusive to this stage to prepare for the second part; blasting at full speed in the Rocket Barrel without crashing.

In the Game Boy Advance version, there are several changes made, mainly to add the stage's difficulty higher; the stage lacks a Star Barrel, adding much more difficulty, collision into a Buzz turns into an instant loss of life, Red Buzzes can no longer be defeated and the control pad for the Rocket Barrel is normal, unlike the SNES version where the left button on the D-pad makes the Rocket Barrel go left and the right button makes it go left. Also, the Koin has been relocated lower to the surface instead of on a higher elevated cliff. 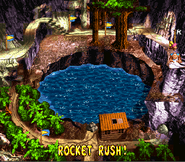 Rocket Rush in the overworld. 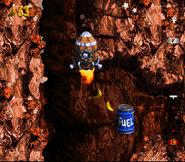 The Kongs passing a Fuel Barrel. 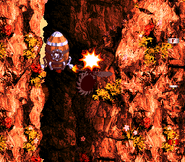 The Kongs in a Rocket Barrel going throughout Rocket Rush while defeating a Buzz. 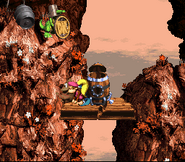 Dixie and Kiddy about to defeat a Koin with the Steel Keg. 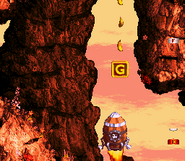 The letter G (exclusive to the Japanese and European version) above the Kongs.

Rocket Rush in the overworld.

A Buzz being defeated by the Rocket Barrel.

Dixie and Kiddy next the Koin at the end of the stage.