Reptile Rumble is the third stage in Kongo Jungle and Donkey Kong Country. It comes after Ropey Rampage and before Coral Capers.

Reptile Rumble is a cave stage that starts out flat but as the Kongs progress, they must navigate several pits and varied terrain. Tires are common in this stage, needed to get to higher areas, but often an enemy will be nearby. Kritters often guard the upper or lower end of the sloped areas, Zingers usually lurk around tire areas, and Slippas guard the ground stage.

It is the first cave stage, and introduces Slippas, the Tires and bouncing Kritters. There are seven Slippas, thirteen Kritters and four Zingers.

This stage starts out with a wooden barrel and a Slippa. Use the barrel to defeat the Slippa. Then, use the DK Barrel to defeat one of the incoming jumping Kritters; jump on the other one. Once they are both defeated, pick up the other wooden barrel and throw it against the wall under the Letter "K" to access the first Bonus Stage. Quickly crawl under the cave ceiling and jump onto the ledge to collect the red Extra Life Balloon before it flies away. Next, exit the Bonus Stage and continue on until the half-buried tire and the DK Barrel on the ledge above. Use the tire to jump to the ledge, and then jump to the ledge's left to find the second Bonus Stage. In this Bonus Stage, simply jump into the autofire barrel cannons, and they will shoot the Kongs into many bananas. After the Bonus Stage, continue forward, defeating the blue jumping Kritters by jumping on them with the half-buried tires. Once the Letter "O" is in sight, be careful not to touch the nearby patrolling yellow Zingers. The Star Barrel is shortly after the Letter "O."

The Letter "N" is also shortly after the Star Barrel. After collecting this K-O-N-G Letter, instead of jumping onto the nearby ledge with a wooden barrel and a DK Barrel on it, continue onward into the small pit with two Slippas. Defeat them, then jump back up to the ledge, pick up either barrel, and use it to break a hole in the wall on the right-hand side of the Slippa pit. This is the third Bonus Stage. Here, jump high on the pushable tire to collect bananas. If the Kongs fall off the pushable tire, go left to jump back up and try again. Following the Bonus Stage, jump over the yellow Zinger by bouncing on the tire. Then, crawl under the shallow ceiling to find two jumping Kritters and an Enguarde token. Jump on the Kritters to reach the token. Next, defeat the four Slippas, and jump onto the staircase of half-buried tires. Collect the Letter "G," but be careful not to get hit by the jumping Kritters. 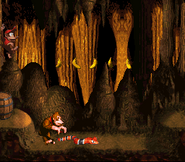 Donkey and Diddy about to defeat a Slippa. 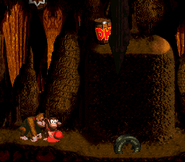 Donkey and Diddy underneath the Bonus Barrel leading them to the second Bonus area. 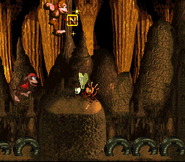 Donkey and Diddy about to obtain the letter N. 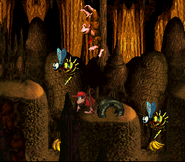 Donkey and Diddy bouncing over a Zinger. 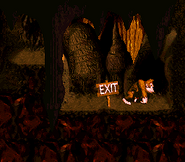 Donkey at the end of the stage.

Reptile Rumble in the overworld.

Reptile Rumble in the overworld in the Japanese version.

Diddy at the start of Reptile Rumble.

Diddy underneath a bouncing Kritter.

Donkey next to the letter K.

Donkey next to a DK Barrel and a Bonus Barrel.

Diddy bouncing off a Kritter.

Diddy next to a Zinger guarding the letter O.

Diddy underneath the Star Barrel.

Diddy next to another Zinger which, this time, is guarding the letter N.

Diddy underneath a regular barrel and a DK Barrel.

Diddy next to a swarm of Slippas.

Diddy next to two bouncing Kritters under an Animal Token of Enguarde.

Diddy about to nab the letter G.

Diddy at the end of Reptile Rumble.

Reptile Rumble in the overworld.

The start of Reptile Rumble.

Donkey and Diddy underneath the letter K.

Donkey and Diddy underneath the Bonus Barrel leading them to the second bonus area.

Diddy bouncing on three Kritters to obtain a photograph.

Donkey and Diddy defeating three Slippas to obtain a photograph.

Deutsch
Community content is available under CC-BY-SA unless otherwise noted.