"He has a spring in his step, but that song in his heart is not a happy one! Re-Koil never leaves his designated post, making him an easy target for a strategically placed stomp." --Nintendo Player's Guide, page 12

Re-Koils are members of the Kremling Krew and are common enemies debuting in Donkey Kong Country 3: Dixie Kong's Double Trouble! and Donkey Kong Land III. They are orange Kremlings with yellow bellies and wear no clothing. Their attack style is often to just use their spring-like tail to hop around on set courses. They were also planned to reappear in Donkey Kong 64.

Re-Koils appear very often and bounce on the ground on set paths. They can often be used to reach higher platforms or are simply there to attack the Kongs. They first appear in the level Murky Mill. 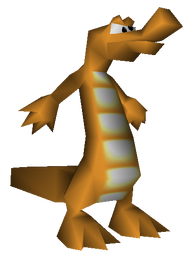