Donkey Kong Wiki
Register
Don't have an account?
Sign In
Advertisement
in: Articles in need of infoboxes, Companies, Video game developers,
and 9 more

Rare was the successor for the defuct video game company called Ultimate Play the Game[1] (1982-1987). Early, Rare developed games for the Family Computer/Nintendo Entertainment System, including Wizards & Warriors[2], R.C. Pro-Am[3] and Battletoads (1991)[4]. After the success of these titles, Rare became a second-party developer for the Nintendo between 1994 and 2002, creating games such as Killer Instinct (1994)[5], GoldenEye 007 (1997)[6], Banjo-Kazooie, Jet Force Gemini[7], Perfect Dark[8] and Conker's Bad Fur Day. During the same period, Rare also developed the Donkey Kong Country and Donkey Kong Land series as sequels for the Nintendo's classic Donkey Kong series. These new series did protagonize Donkey Kong, a new character and the grandson of the former Donkey Kong Sr. (currently known as Cranky Kong), and they did introduce many original characters, including new members of the Kong Family and the Kremlings. Rare received great recognition and critical acclaim for their games.

In 2002, Rare was acquired by Microsoft Game Studios[9]. All rights for the original games and characters, except for the Donkey Kong games, become owned by Microsoft[10], such as the Banjo-Kazooie and Conker series. Despite this causing the cancellation of some games (see Canceled games section below), later on, Rare did develop remakes of some of their Donkey Kong games for new Nintendo systems.

Under Microsoft's exclusive releases, Rare was responsible for developing many games, including Grabbed by the Ghoulies[11], Conker: Live & Reloaded, Perfect Dark Zero[12], Banjo-Kazooie: Nuts & Bolts, Killer Instinct (2013)[13] and Sea of Thieves[14]. The games Banjo-Kazooie and Banjo-Tooie, former exclusives for the Nintendo 64, were re-released as enhanced ports for the Xbox 360[15]. Both games, alongside Conker's Bad Fur Day and many other original games created by Ultimate Play the Game and Rare, were re-released on a compilation called Rare Replay[16] for the Xbox One[17] in 2015. 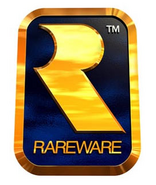 Rareware's logo as seen at the starting screen of the game Donkey Kong GB: Dinky Kong & Dixie Kong for GBC.

Rareware's logo as seen at the starting screen of the game Donkey Kong Country for GBC.