In order to defeat this large Zinger, Donkey and Diddy Kong will have to pick up a Vine Barrel (which will break upon contact or dropping with anything), and throw it at Queen B. Afterwards, she will become enraged and turn red out of rage, gaining resistance for a short period of time (much like the red Zingers, resistant enemies to regular barrels). Queen B. will vertically swoop up and down trying to hurt the Kongs, but if not hit for a while, she will calm down and another barrel will spawn. After receiving five hits, Queen B. is defeated.

In the Game Boy Color version of Donkey Kong Country, Queen B. has very similar patterns of attacks to the SNES version. She is defeated after receiving five hits.

In Donkey Kong Country's Game Boy Advance remake, after being hit, she will turn red and surround herself with other four or five regular sized Zingers to act as a defensive barrier and attack the Kongs. The regular Zingers must be all defeated with barrels to make Queen B. return to normal. In this version, she is also defeated after receiving five hits.

Donkey Kong Country (GBA).
Add a photo to this gallery 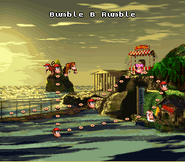 Bumble B Rumble stage in the map of the Vine Valley world. 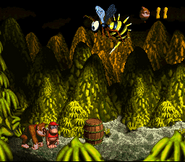 Queen B. about to land on Donkey and Diddy Kong. 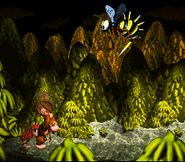 Donkey Kong about to throw a Vine Barrel at Queen B. 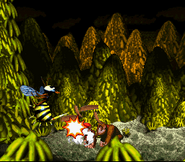 Queen B. hit by a barrel. 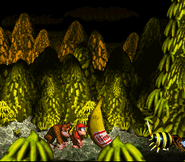 Queen B. defeated.
Add a photo to this gallery

Donkey Kong about to throw a barrel at Queen B.
Add a photo to this gallery

Bumble B Rumble stage in the map of the Vine Valley world.

Donkey Kong about to throw a barrel at Queen B. and her Zinger minions.

The hidden photograph of a Zinger revealed.

Queen B. defeated.
Add a photo to this gallery

Retrieved from "https://donkeykong.fandom.com/wiki/Queen_B.?oldid=67427"
Community content is available under CC-BY-SA unless otherwise noted.