Not to be confused with its green counterpart, Squawks the Parrot

A bunch of Quawks first appear in the game Donkey Kong Country 2, only in the stage Parrot Chute Panic of the Gloomy Gulch world. Unlike Squawks, Quawks cannot spit eggs out of his mouth or fly upwards. His ability in this game is to carry the Kongs and help them to traverse the stage while avoiding enemies. After Diddy and Dixie Kong reach a Quawks, he will automatically catch the heroes and descend constantly. Each Quawks will carry the primates during specific sections of the stage, dropping the Kongs as soon as the current section ends. By holding the "Up" and "Down" buttons, the player can slow down and speed up Squawks' descend, respectively. It is also possible for the parrot to drop the heroes early by pressing the "X" button in the Super Nintendo Entertainment System version and the "L" button in the Game Boy Advance version of the game.

Quawks’ second appearance is in Donkey Kong Country 3. In this game, Quawks appears to be of a darker purple, and possesses Squawks' ability to fly upwards. However, he cannot spit out eggs, but he can now lift up barrels with his talons and drop them. During both stages Low-G Labyrinth and Buzzer Barrage, Dixie and Kiddy Kong must use an Animal Barrel to turn into Quawks and progress.

Quawks later appears in the game Donkey Kong Barrel Blast as an item. This game marked the first time Quawks' name was known outside of Japan. When used, Quawks would fly off to the player in the lead and try to ram the player from behind. Quawks can be easily dodged by jumping or steering left or right at the right moment.

sprite of a Quawks Barrel from the game Donkey Kong Country 3. 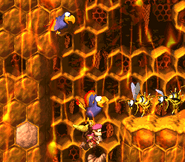