Not to be confused with Pufftup from the game Donkey Kong Country: Tropical Freeze.

Puftups are blowfish enemies that first appeared in the game Donkey Kong Country 2. They have made various appearances since. Puftup's name comes from the fact that it is "puffed-up."

Puftups appear as semi-common underwater enemies of the "Submerged Seadogs" class in Donkey Kong Country 2. Their main attack pattern was to either inflate largely, posing as obstacles, or inflate and quickly explode, sending spikes in various directions. As with most underwater foes, Enguarde's bill stab will make quick work of it, though Enguarde himself is vulnerable to the Puftup's spikes.

Puftups also appear in the game Donkey Kong Land 2 for Game Boy. As such, there are no major changes aside from some of them not being able to puff up, and they not being able to explode at all, likely due to hardware limitations.

The game Donkey Kong 64 marked the next appearance of the enemy. Puftups in this game are purple and do not move, but if approached by a Kong they will explode, as if an underwater mine.

The boss of the level Gloomy Galleon, is a giant Puftup named Puftoss. During the boss fight, Puftups appear usually after Lanky Kong has damaged Puftoss three times and they chase Lanky around very quickly. Lanky must keep going in order to avoid damage.

Puftups also appear during the boss fight against King Kut Out in the level Creepy Castle, where a few can be seen in the water around the arena.

Puftups make their most recent appearance in the game DK: Jungle Climber. Using the charge attack against them when they are deflated defeats them. 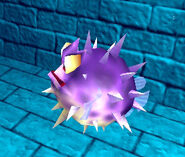 A Puftup that appears during the Creepy Castle boss fight against King Kut Out, as seen in the game Donkey Kong 64 for Nintendo 64.

A inflated Puftup nearby Enguarde the Swordfish as seen in the game Donkey Kong Country 2 for GBA.

A inflated Puftup as seen in the game DK: Jungle Climber for DS.