While some of this level takes place along the sandy beach, most of it involves Donkey and Diddy Kong jumping along moving planks above the water. The Kongs cannot swim, so they must stay on the platforms at all costs. This level is also the first to feature pulley platforms similar to those from Super Mario Bros., which tilt down with the weight of the heroes. This causes the platform on the opposite side of the weight to rise. Additionally, there are wavy bridges in this level, as well as a single whale that shoots bananas at the Kongs. Enemies in this level consist mainly of Pinchlies, but there are also Snaps, Snaggles, Golden Snaggles and Tiki Buzzes.

The level begins with a sandy pathway out of the jungle that is covered by a few Snaps enemies. As Donkey and Diddy Kong pass two high, wooden platforms, they can find a large peg that can be pounded on to make another peg appear under the platforms. They can use it reach the two platforms to the left and collect some bananas and the first Puzzle Piece. Farther ahead is a DK Barrel and some small platforms surrounded by spikes. Two wooden planks are above these platforms, the first one with the letter "K" of the K-O-N-G Letters on it, and the second with two Banana Coins. After this area, the primates can find a treasure chest with an Extra Life Balloon near a Snaps. As the heroes progress more, they will find another peg to be pounded and reveal a second peg and a barrel cannon. The barrel will take the primates to a room inside a ship hull in the background. There, the Kongs must defeat the two Pinchlies to reveal the second Puzzle Piece. After colleting the piece, the heroes must go into the barrel cannon at the top of the room and return to the previous area of the level. Moving on, they come up to some floating banana bunches and more crab enemies. The next peg must pounded on to reveal a treasure chest behind the Kongs containing the third Puzzle Piece. They also must pound the next peg into the ground to make another peg appear in the area forward. This revealed peg can be used as a platform to jump over a wall with dandelions growing on it. On the other side of the wall is a giant DK Platform. If it is pounded once, a whale surfaces in the background and shoots bananas out of its blowhole. The bananas land in the following area, where there is a wavy bridge that can shoot the Kongs into the air. The bridge can help the heroes reach some hanging platforms at the end of it.

More hanging platforms are after this platform, and the second of the platforms has a few breakable crates on it. After passing a platform with a Snaps on it, the primates can get to another platform that moves them over the water and to a solid and flat bridge. The letter "O" is high in the air at the end of this bridge, but it can only be reached if the Kongs use the some pulley platforms following it. One side of these pulley platforms tilt with the weight of the Kongs or any enemy on it, including the Pinchly that is placed on it. The enemy must be defeated to balance out the weight. The primates must first jump on the right platform to lift up the left one, quickly jump over it and jump again to collect the letter "O". Below the weights is another bridge, so the Kongs do not have to worry about sinking in this area. However, right after the weights is another area with a swinging platform that is above water and has some crates on it. A platform that repeatedly rises and falls is placed next to this with a Snaps on it. That platform helps to pull the Kongs to the next platform, which holds a few barrels under it. The primates can break the ropes supporting it by pounding on it, causing the platform to fall and float over the water. As the primates float over the water, they come up to some Tiki Buzzes and bananas floating in the air. When they finally reach land again, they can meet the Tutorial Pig, who marks the checkpoint.

Soon after the checkpoint, there is another treasure chest containing the fourth Puzzle Piece. As the Kongs progress across the sandy beach, they pass a Pinchly and a stray cannon on the background. A wooden platform holding a DK Barrel is also in this area. The primates must ground-pound close by the cannon for it shoot on the suspended ship hull nearby. Another Pinchly will walk way from inside the place, and the ship hull is a entrance to a Bonus Room. In the room, the heroes must use two barrel cannons to collect all eighty bananas and two Banana Coins, while avoiding an autofire barrel, within thirty seconds and make the fifth and final Puzzle Piece to aapear. After the Bonus Room and following the beach area are some ship parts floating atop the wavy water. They can use it as platforms to reach the next area. As they cross the gaps between each platform, they come up to some floating collectibles. However, at the same time, Snaggles jump out at them. The letter "N" is also located above the second of these floating ship parts. On the other side of the water is another area of land, where the Kongs come up to some dandelions and a Pinchly in front of a crashed ship. Near here is another wavy bridge. This bridge has spikes on some sections of it, but they flip over after regular sea waves that travels across it. The waves can help the primates not only get many collectibles in the air, but also help them reach another hanging platform. The following hanging platforms just after it move either vertically or horizontally.

The Kongs must travel along the platforms, which are attached by large cranes in the background, to advance to a lower area of these moving platforms. More enemies appear as they move on, including Tiki Buzzes and Snaps. Crates are also placed on some of the platforms. Eventually, the primates jump off of a platform moving in a horizontal path to reach a swinging platform with a banana bunch on it. A platform that moves up and down with a banana bunch on it is just ahead, but a Golden Snaggles jumps out in front of it. Another platform that moves up and down is right after this with the letter "G" on it, and it is followed by another swinging platform with a banana bunch. As with the first platform, Snaggles jump out of the water between each of these planks. Eventually, the Kongs can reach a floating ship part with some crates on it that can aid the primates in reaching more moving platforms. There are three remaining platforms after the ship hull, and each of them move up and down. Snaggles also jump in right below of them. After the last platform is the level's Slot Machine Barrel. If Donkey or Diddy Kong touch the barrel, the level is completed.

The puzzle of Poppin' Planks is of a strawberry against a light green background. When all of the pieces are found, the Mugly artwork will be added to the Boss Gallery of the Image Gallery in the Extras menu. 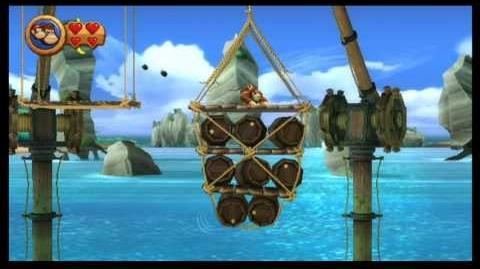