Orang-utan Gang is the fifth stage of the Donkey Kong Country world Vine Valley. This stage is the final jungle stage of Donkey Kong Country. It is the first stage that introduces Manky Kongs, enemy Kongs that throw barrels at Donkey Kong and Diddy Kong. Expresso is also another feature here who can fly over obstacles and helps the monkeys get through the stage. Alongside Manky, Kritters, Klaptraps and Zingers appear as enemies in the stage. 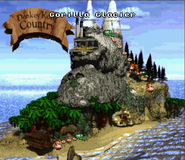 A glitched map showing Kongo Jungle and Gorilla Glacier as uncleared worlds simultaneously, a result of the Kongo Jungle world warp glitch.
Add a photo to this gallery

Retrieved from "https://donkeykong.fandom.com/wiki/Orang-utan_Gang?oldid=66699"
Community content is available under CC-BY-SA unless otherwise noted.