It is quite a unique map screen, not only for its massive size, but for its depth in traveling it; players not only have the complete freedom of swimming in the water, they can even ride boats (via Funky's Rentals) to travel in the area, to find secret caves for bonuses. The worlds remain restricted to a set path most of the time, although the player is once given a choice between two worlds.

The landscape is very rich of nature and healthy, with many forests and many lakes covering the landscape. As such, a majority of the levels and worlds take place in woods, with some lake/water levels as well. There appear to be some snowy mountain areas and an industrialized area as well. Wrinkly's Save Cave and Funky's Rentals can be accessed, different from the overworld map from the previous two games, as well as areas to find the Brothers Bears. The map in the previous two games only had access to the areas themselves. This is likely due to the large scale of the map itself, and less freedom to explore it would make it seem limited.

Funky's Rentals, which is found on the main overworld, has different vehicles for the Kongs which allow for more freedom with each new vehicle. It is only found on the overworld, unlike previous games where Funky could only be found in worlds. However, his travel service has changed: he now runs a motorboat rental service. These motorboats are critical to the exploration of the area, as some boats are needed to access later areas. By defeating certain bosses and collecting items, Funky will construct boats to travel over rocks and even waterfalls. In addition, using the boats makes travel faster in general. Funky also constructs a the Gyrocopter late in the game which can be used to fly over the mainland, once all DK Coins are found.

Rumors say that Cranky Kong explored various locations in this mainland covered all and found everything by five hours and fifteen minutes.[5]

Months ago after the events of Donkey Kong Country 2[6], some grounds were immigrated by Kremling remnants known as Kremling Kreeps, establishing their industrial bases in Mekanos and K3.[7][8] Two days after Donkey Kong and Diddy disappeared, many places were conquered by Kremling Krew regrouped by KAOS.[9]

In Donkey Kong Country 3: Dixie Kong's Double Trouble!, Dixie and Kiddy explore the mainland here in search of Donkey and Diddy, who went here and mysteriously never returned. In the Game Boy Advance version, a new world called Pacifica was found. In Donkey Kong Land III, even more new areas were found, likely due to the amount of people searching for Lost World in the contest, such as Cape Codswallop. 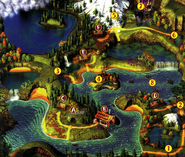 Artwork highlighting interest points of the Northern Kremisphere, based on the map seen in the game Donkey Kong Country 3: Dixie Kong's Double Trouble! for SNES.

The overworld map of the Northern Kremisphere as seen in the game Donkey Kong GB: Dinky Kong & Dixie Kong for Game Boy Color.

The overworld map of the Northern Kremisphere as seen in the game Donkey Kong Country 3 for GBA.