Mountain Mania is the second stage in Autumn Heights from Donkey Kong Country: Tropical Freeze. It is also the first Rambi stage of the game. It is preceded by Windmill Hills and followed by Horn Top Hop.

This level takes place in a mountainous area, hence the name, and contains several small towers with bells.

Donkey Kong and Diddy Kong start in an area similar to the end of Windmill Hills, and soon after, there is a Barrel to bring in Dixie Kong as DK's partner. There is also a large stone block with Rambi's symbol on it under the platform, hinting that he may appear later in the level. After the two go through an area with Fluffs and a Cheesy Chester, there will be a crate which the Kongs can open and find Rambi, who can be ridden and used to smash through objects (such as spikes and weak structures), as in Donkey Kong Country Returns. After going through an area with enemies such as Waldoughs, Rambi, DK, and Dixie will go through a series of Barrel Cannons to a similar area where there is a Checkpoint and some structures with bells that give bananas when rung.

Past these, there will be another Checkpoint and a platform which the Rambi and the Kongs can stomp on to reveal a Barrel Cannon that brings them to another large area with several wood bridges, which can be destroyed by volcano fire and enemies such as Cheesy Chesters, Walbricks, and Blue Hootz. After the third Checkpoint, there is a rocky area with the above surface descending and more stone blocks, which must be smashed by Rambi to get through and avoid being crushed by the falling rock. After this, there is a short area with platforms and more stone blocks, and at the end, there is the Slot Machine Barrel. 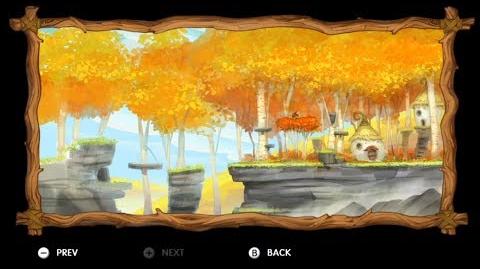