For other uses, see Cranky's Hut

The Monkey Museum, is a location that Cranky Kong resides in, seen in every world of Donkey Kong Country 2: Diddy's Kong Quest, excluding The Flying Krock. It is a spiritual successor to Cranky's Cabin (to the point where it is assumed the Museum is the interior of it) and works in a very similar way.

The Monkey Museum works in a very similar way to Cranky's Cabin, though it has been made much more convenient. First off, players can now actually choose what information they want to learn about, and most of the tips seem clearer in general. There are now tips available for every level in the current world and some tips are free, though some of the tips require a small one to three Banana Coins payment before hearing. These tips usually help find Bonus Barrels, extra lives, or more bananas and coins. Most of Cranky Kong's humorous ranting this time around is from short entering and leaving comments.

In the Game Boy Advance remake of Donkey Kong Country 2, not much has changed aside from renaming it "Cranky's Hut", a redesign of the cabin, removing references to non-Nintendo owned franchises, and the fact that players can now access the minigame Expresso Racing.

After the ending credits in both games, the museum is also the place where Cranky Kong explains about his Video Game Heroes contest to Diddy and Dixie Kong.

In the Super Nintendo Entertainment System version of Donkey Kong Country 2, there are several Easter Eggs[1] inside the Monkey Museum, including references to a different game made by Rare. 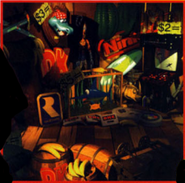 A beta version of Monkey Museum in full color, found in Donkey Kong Country 2 player's guide. Enguarde was inside the glass box instead of Winky. And there was a golden statue of Rambi instead of Expresso statue.

A clearer view of the whole museum's interior. 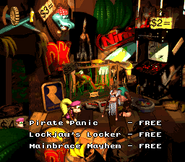 Interior of Cranky's Hut in Donkey Kong Country 2 for GBA.