Monkey Mines is the second world of the Donkey Kong Island in the game Donkey Kong Country. As the name suggests, it contains cave stages with tunnels and mine carts. Monkey Mines also appears to be an old, ancient relic-like area of island, given the background of the penultimate stage of the world and the old Kremling illustrations in the temple locations. The boss of Monkey Mines is Master Necky.

Like other mines in the island, this mining area was also excavated and stripped of any ore, leaving behind only mine tools, carts, scaffolding platforms and elevators.[1][2][3]

Winky's Walkway is the first stage of Monkey Mines, and the first mine stage in the game. It is named after Winky the Frog, an Animal Buddy who also makes his debut here, and he is found inside an Animal Crate in the early portion of the stage. Winky is capable of jumping very high, being used to reach objects in high places, usually unreachable by the Kongs on foot. The frog can also bounce safely on strong enemies, such as Zingers. This stage contains series of walkways riddled with regular Kritters and a few Neckies. It is also the first location to feature Oil Drums capable of summoning multiple Gnawties. The same stage is also longer in the Game Boy Color version, with more walkways at the final section, some special collectables placed further within the location, and containing more enemies, including a single Mini-Necky near the end of it.

Mine Cart Carnage is the second stage in Monkey Mines. It is the first mine cart stage of the game, and will have the player riding a single unstoppable mine cart through a long series of tracks, most of which are torn apart. The vehicle is capable of jumping and several mine carts will also be found derailed over the tracks at the second half of the location as well. They act as obstacles for Donkey and Diddy Kong to jump over them. There are also a few Krashes, invincible Kremling enemies also riding mine carts, which collision against them must be avoided by jumping over them.

Bouncy Bonanza is the third stage of the current world. As the name implies, there are several bouncy tires throughout it. Most of them are half-buried on the ground, but the heroes can push the other type around in order to reach high places. Many leaping Kritters are regular enemies, jumping at the same location at regular patterns. Zingers are also found here, usually flying around collectables and above pits. An Animal Crate containing Winky the Frog can be found inside a room after the first half of the stage.

During the fourth stage of this world, the Kongs must pass Rockkrocs, most invulnerable rock enemies, by hitting the Stop & Go Barrels. When the barrels are switched to "Stop", lights on the stage will become red, and these enemies will cease movement, curl up into rocks and become harmless temporarily. The opposite happens when the barrels are switched to "Go", activating green lights. Rockkrocs makes their only appearances in the entire game here. In the Game Boy Advance version, when the same enemies are curled up, they can be defeated by Donkey Kong's Hand Slap move. Klaptraps, tiny Kremling enemies with big jaws, also make their debut appearance as well.

A temple-based ruins stage, Millstone Mayhem is the final regular stage of Monkey Mines. Regular Krushas, strong Kremling enemies, make their appearance as the very first enemies of the stage, and can be defeated by throwing barrels at them or having Donkey Kong to jump on them. Diddy Kong cannot defeat them by jumping due to his small size, and both primates cannot defeat Krushas with their roll attacks. Special variants of Gnawties can also be first found here, moving by riding large wheels and patrolling around at regular patterns. These enemies being invulnerable against all attacks force the player to just avoid them. Winky the Frog is inside an Animal Crate placed on an upper floor and midway through the stage. Millstone Mayhem is a rather long stage, with leaping Kritters, Slippas and some Neckies on the ground throwing coconuts.

Like other boss stages in the game, this one is also located nearby banana hoards. Master Necky, a large vulture, is the boss present here. He only shows his head, randomly appearing from both sides of the small arena at different heights. Master Necky attacks by spitting single coconuts at the heroes and leaving the screen soon afterwards. The projectiles can harm the Kongs even after bouncing once on the ground. And before each attack, the boss will be invincible temporarily. Additionally, in the GBA version, Master Necky will become invincible again just before leaving the screen. After avoiding each coconut attack by using good timing and jumping, the primates must use the half-buried tire on the middle of the arena in order to jump high and reach the top of the head of boss before he leaves, harming him once. Master Necky will be taken down after receiving a total of five hits, and the heroes will receive a Giant Banana.

After that, the player will be able to enter the world Vine Valley on the overworld map of the Donkey Kong Island.

"The vast mines of Donkey Kong Country have been stripped of any ore they may have once contained. All the tools of the miners remain, however, from mine carts to rickety scaffolding. There are special barrels that turn the lights on and off, and risky mine elevators full of slag. Without a hard hat, mine exploration is not recommended, but Klump is not about to give up his!"
—Donkey Kong Country Instruction Booklet (SNES version), page 23 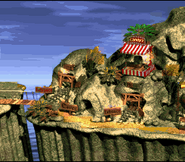 The first half of the world map of Monkey Mines as seen in the game Donkey Kong Country for SNES. 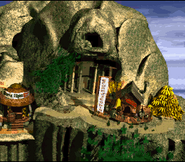 The second half of the world map of Monkey Mines as seen in the game Donkey Kong Country for SNES.

The world map of Monkey Mines as seen in the game Donkey Kong Country for GBC.

Artwork of Donkey and Diddy Kong riding mine carts in the mines from the game Donkey Kong Country.