Max's train is small and red, with a big drill in front, and five carriages used for storing the stolen bananas. It also has a small window with no glass, and has a light in front of the cabin. It, for some reason has two chimneys (one on top the drill, for some unknown purpose), and one on top of the cabin itself. It also has a ladder leading to the cabin. Max, himself, is a mole of giant size (twice as big as the other Mole Miners and Mole Guards), clearly making him the leader of the moles. He wears a hardhat like all the other moles, and wears a heavy duty vest. Like the other moles, he throws pickaxes at Donkey and Diddy Kong in order to hurt them.

At the beginning of the level, the player must go right and, if necessary, throw the DK Barrel to summon a second Kong. Afterwards, a cutscene will show the Mole Miners filling mine carts with bananas. Banjo Bottom will notice the Kongs and pull the train whistle. The Mole Miners will board the mine carts full of bananas. Soon, Banjo Bottom will hypnotize and possess Mole Miner Max. Max will start the train and the primates will follow boarding the last mine cart of the train.

This boss battle consists of four phases. The primates will find themselves on a mine cart at the left side of the screen, away from a group of four mine carts attached to the steam train. A Mole Miner will appear on the last mine cart attached to the group of four and throw pickaxes towards the Kongs at low and high heights. After throwing some pickaxes, the mine carts will go down a hill and the Mole Miner will continue to throw more pickaxes at the primates. There are passing nets holding hearts for the heroes to get in case of damage. Back on leveled terrain, the steam train will detach the four mine carts and the Kongs' mine cart will attach itself to the others (the previous section can be entirely skipped by using a well-timed roll-jump and/or Diddy's rocket pack to reach the group of four mine carts earlier, it being easier to pull out during the down hill section). In this section, the primates need to avoid the Mole Miners emerging from random mine carts and knock them down by jump attacks when it is safe. It is also possible to stun the Mole Miners by ground-pounding nearby them. The Kongs need to hit ten Mole Miners. If the heroes take too long to defeat all Mole Miners, another steam train will appear behind the mine carts, destroy them one by one and defeat the Kongs. After beating all Mole Miners, random mine carts will start to miscarriage and the primates must stay on the mine cart without blue flashing wheels for safety. The second phase of the boss fight will start.

This phase is very similar to the first one, but the Mole Miner throwing pickaxes will be more aggressive and throw bombs. The Mole Miners emerging from mine carts will also become faster. The Kongs must repeat the previous strategy and beat ten Mole Miners. After this, the third phase will be next.

The third phase is also very similar to the previous ones, but the section with Mole Miners emerging from mine carts will be through a darker tunnel. After defeating ten more Mole Miners, the primates' mine cart will attach itself to another group of mine carts pulled by the driver's cabin of the steam train. After this, the fourth and final phase will start.

In this phase, the primates must face Mole Miner Max alone. He will leave the driver's cabin and resort to hiding inside random mine carts. He is faster and bigger than the Mole Miners. The flattering of the carts will be more unstable as well. When appearing far away, Max will throw pickaxes towards the Kongs at low and high heights. When appearing beside the primates, he will try hit them with a pickaxe. The primates must avoid his pickaxes and jump on his head. After four hits, Max will be defeated.

A cutscene will show the Kongs beating Max off screen and throwing him into the driver's cabin. The steam train will break down and stop at the end of tracks, just about to fall down in the abyss. Banjo Bottom will come out dizzy and disgruntled. After the cutscene, the player has the option of beating down the Tiki Tak Tribe leader multiple times (of up to twenty-four) or to let it run away. Either way, the Forest world will become accessible now.

Mole Miner Max appears as a trophy in the game Super Smash Bros. for Wii U. 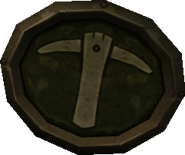 The first phase of the boss fight, as seen in the game Donkey Kong Country Returns for Wii.

The second phase of the boss fight, as seen in the game Donkey Kong Country Returns for Wii.

The third phase of the boss fight, as seen in the game Donkey Kong Country Returns for Wii.

Mole Miner Max being defeated, as seen during a cutscene of the game Donkey Kong Country Returns for Wii.

The steam train at the edge of the abyss, as seen during a cutscene of the game Donkey Kong Country Returns for Wii.

Conceptual artwork of the Mole Miners inside the steam train from the game Donkey Kong Country Returns for Wii. 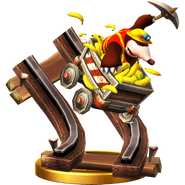 Mole Miner Max's trophy as seen in the game Super Smash Bros. for Wii U.