"It's just like the old days, reusing the boss, changing it's color and pretending it is something completely new!"
—Cranky Kong in the Game Boy Advance version of Donkey Kong Country

Master Necky Snr. is the former leader of the Neckies before having been defeated by Donkey and Diddy Kong. He is the second to last boss in Donkey Kong Country, found at the very end of Chimp Caverns, in the stage Necky's Revenge. After defeating him, Gang-Plank Galleon becomes available to the player.

His main attack and defeating method are similar to Master Necky. He will rear his head and launch a coconut, and the Kongs need to react quickly to avoid the projectile and jump on his head via spring. Before spitting all his coconuts each time, he appears, the boss will be temporarily invincible to jump attacks. After receiving a hit, he will launch one additional coconut in a row. Not being hit once, he will launch one; after receiving one hit, he will launch two coconuts, etc. Seeing how fast they are in succession, the coconuts are quite annoying to dodge, and players must work on timing to dodge by using the tire at the center of the arena. After receiving five hits, Master Necky Snr. will be defeated.

Master Necky Snr.'s attack patterns are very similar to the SNES version. He is also defeated after receiving five hits.

In the Game Boy Advance remake, Master Necky returns to assist Master Necky Snr. alongside him. In the battle, when it starts, the Neckies will both fire coconuts, but will only do one at a time regardless of how much they are hit until defeated. Once one is down, the other will resume the attack pattern of the Master Necky Snr. in the SNES version (Master Necky can do it as well). Each boss must receive five hits in order to be defeated. 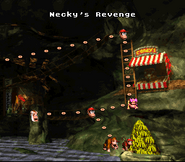 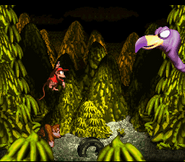 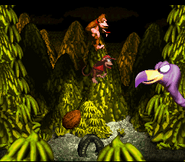 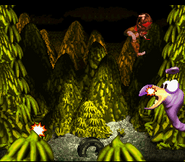 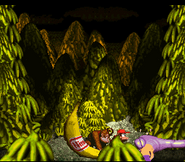 Both Master Neckies about to spew coconuts.