Master Necky is a giant Necky who rules the clan of Neckies. He appears in Donkey Kong Country and is located in Monkey Mines, in the stage "Necky's Nuts". He also reappeared in the Game Boy Advance remake as a secondary boss in Chimp Caverns.

In the Game Boy Advance remake of Donkey Kong Country, he has changed a little. In his battle, he gains invincibility before spitting a coconut (he'll be glowing red) and spits some when he's retreating. Master Necky also appears alongside Master Necky Snr. in the second to last boss fight. 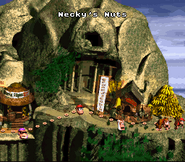 Necky's Nuts in the overworld. 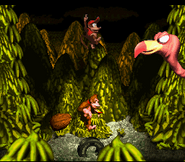 Donkey and Diddy avoiding the nuts spewed by Master Necky. 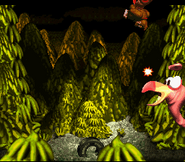 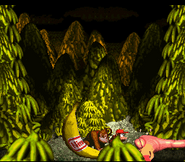 Necky's Nuts in the overworld.

Master Necky about to spit coconuts at Donkey and Diddy.

A hidden photo revealed in the area.