The Maraca Gang first appears in the boss level Pinchin' Pirates in the Beach where they hypnotize and control the Scurvy Crew to attack Donkey Kong and Diddy Kong. When the crew of pirate crabs are defeated, they will pass out. The tiki group will leave the creatures' bodies and stay dizzy for a few seconds. The player can jump towards the Maraca Gang, beat them multiple times and send them away. If the player decides to wait, the Maraca Gang will recover, and run away by flying towards the screen.

They later appear in the final boss battle and help Tiki Tong by turning into hands for it. They are also presumably destroyed, when Tiki Tong is defeated by the Kongs. 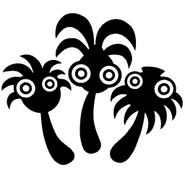 The Maraca Gang's silhouettes always seen at the screen when a Kong loses an extra life in the Beach world of both games.