This stage is the very first stage to take place on the high rigging part of a boat in a pirate ship. It is more advanced than Pirate Panic as gaps get in Diddy and Dixie's way. There are also ropes needed to be climbed in order to get throughout the stage. Five Click-Clacks, seven Klingers, three Klomps and ten Neeks appear as the foes to get in the two primates' way.

Like the semi-sequel, it takes place on the high rigging area of the ship and has pitfalls as obstacles along with ropes needing to be clinged on. It is more advanced in terms of difficulty than Pirate Panic is too, being another similarity between the two games. There are eight Klingers, five Click-Clacks, two Krunchas, seven Neeks and three Zingers. 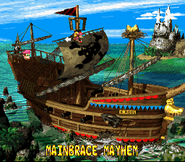 Mainbrace Mayhem in the overworld. 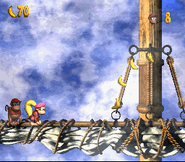 Diddy and Dixie at the start of Mainbrace Mayhem. 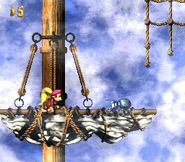 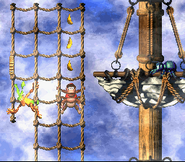 Diddy and Dixie climbing up ropes, next to a Klinger. 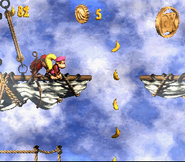 Diddy and Dixie near the DK Coin.
Add a photo to this gallery

Mainbrace Mayhem in the overworld.

Diddy and Dixie at the start of Mainbrace Mayhem.

Diddy and Dixie next to two Klingers.

Diddy and Dixie near the DK Coin to the right.
Add a photo to this gallery

Retrieved from "https://donkeykong.fandom.com/wiki/Mainbrace_Mayhem?oldid=56143"
Community content is available under CC-BY-SA unless otherwise noted.