"Lurchin's hard, spiny shell is something that not even Enguarde's blade can't pierce. Wait until Lurchin exposes his soft insides before you try to take a swipe at him." --Nintendo Player's Guide, page 12

Lurchins appear in various stages that feature water. Even some boardwalk stages feature them. Their attack pattern is to stay in place and slowly open and close their shell. Contact with its spiky shell will injure a Kong or Enguarde the Swordfish. Lurchin's weakness is its flesh; when it opens its shell, Enguarde can stab his bill at the Lurchin and defeat it. The blue Nibbla can also eat it; however, when it does, it becomes angrier. Enguarde's way of killing it is also exploited with its larger boss form, Barbos. However, during the GBA stage Ripcurl Reef, you can see golden-shelled ones with green bodies.

Lurchin in this game remain relatively unchanged. The larger boss form, Barbos, also reappear and can summon them. 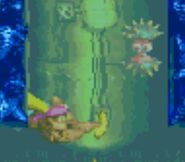 Dingy Drain-Pipe
Add a photo to this gallery
Retrieved from "https://donkeykong.fandom.com/wiki/Lurchin?oldid=69584"
Community content is available under CC-BY-SA unless otherwise noted.