Lord Fredrik, The Snowmad King is the fearsome leader of the Snowmads, the main antagonists of the game Donkey Kong Country: Tropical Freeze, the boss of the world Donkey Kong Island, as well as the sixth and final boss in the game.

With a fleet of ships and an army at his beck and call (not to mention an enchanted horn), he has led conquests on several islands and always turned out victorious, as the tribe is searching for a home they can call their own, similar to real-life vikings[1].

His latest military strike - Donkey Kong's home - has left the once tropical place coated in ice and snow; even the Volcano has been iced over. Naturally, it is up to Donkey Kong and the Kong Family to fix things.

Lord Fredrik is first seen sitting on his personal throne set on his flagship as one of his minions informs him of a new land to conquest: Donkey Kong Island. Glad to be conquering a new island under his control, he calls for his henchmen to bring him his magic horn. Taking a deep breath, he sends an Ice Dragon to blow the Kongs away, thereby clearing away anyone who could cause him secondary trouble. His flagship suddenly takes flight, landing on top of the currently dormant Volcano and then sending his Ice Dragon to reshape DK Island to his personal needs.

Lord Fredrik appears as an oversized Waldough who is twice Donkey Kong's size with a pair of glowing blue eyes, with no eyelids. He wears a helmet with a pair of horns on the side with a blue diamond in the middle on top of his head. Lord Fredrik wears a fur cape on his back and has a black belt with light blue pearls with a much larger pearl around his waist.

With his Magic Horn

Much like the previous five bosses in the game, the boss fight against Lord Fredrik is composed by three phases. The battle takes place in an underground volcano cavern surrounded by molten lava.

In the first phase, Lord Fredrik will jump to a nearby platform with his horn. He will then enlarge himself and blow on his horn to rain down six ice balls, one of them will contain a Tuff Tuck or a Tuff Fluff. Donkey Kong must bounce on one of the two enemies, and then throw him at Lord Fredrik, where he will move side to side in order to avoid getting hit. The player must wait for Lord Fredrik to readjust his crown to land an easy hit on him. If Donkey Kong succeeds in hitting Lord Fredrik, he will then jump on the platform where Donkey Kong is and attempts to charge at him with his helmet. That is the chance to damage Lord Fredrik, by hitting his back as he charges, only the player will be bounce off of him as they are being pushed back, preventing them from hitting Lord Fredrik multiple times. After this phase (or in the next phase of the battle), he will ground pound on Donkey Kong, and send parts of the platforms he ground pounds into the lava. repeat the process above two more times to advance to the second phase of the battle.

In the second phase, it is similar to the first, except Lord Fredrik gains a new move; he can now fire Ice Dragons from his horn. The Ice Dragons will fall on Donkey Kong (the player can tell were the Ice Dragon will fall by noticing ice shards falling from the top) and will freeze the platform, causing Donkey Kong to slide. This part of the battle makes it harder to avoid Lord Fredrik's attacks, otherwise, this part of the battle is pretty much the same, just wait until Lord Fredrik summons the ice balls filled with Tuff Tucks and Tuff Fluffs to throw at him in order to hit Lord Fredrik three times and the battle will continue until the final phase.

In the third and final phase of the battle, Lord Fredrick's tactics as a whole still remain the same, but he will summon the ice balls filled with Tuff Tucks or Tuff Fluffs. Hit Lord Fredrik with one of the two enemies, then hit him on his back three times to beat him, only this time, Lord Fredrik will gain two new moves, in the beginning of the battle, Lord Fredrik will jump high to the other side of either platform Donkey Kong is on and unleash a ground pound to send the platforms high into the air, as they are being forced upwards by lava. The platforms one by one will then fall and sink into the lava, for which Donkey Kong will have to land on the platform that is still inside arena. He still retains the ability to fire Ice Dragons, but now he can fire then directly at Donkey Kong like a blaster, for which Donkey Kong will have to ether jump or duck to avoid the Ice Dragons.

After beating this phase of the battle, the main game is complete. 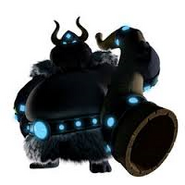