This level is set in a forest where Barrel Cannons are the only way to move from one place to another. The bulk of the level uses Barrel Cannons to reach higher and farther places. Some of these Barrel Cannons are stationary while others move erratically. Towards the middle of the level, the Kongs have to time their cannon blasts as there are now wooden Tiki statues they have to fly through. If they hit one, they bounce right off and fall to their doom. Some of the barrels fire the Kongs long distances across the forest. There is also a giant Tiki statue with moving teeth that can easily crush the monkeys. Common enemies here are Tiki Boings, Skittlers, Tiki Zings, and Flaming Tiki Buzzes.

The level begins on a flat pathway with some item-bearing plants and a DK Barrel on it. A Tiki Boing jumps around just before a slanted part of the path, which is followed by another flat area of land with some Skittlers dropping down on it. A spring attached to a Chomp foe is located in a gap just after a Tiki Boing and some plants. If the Kongs bounce on the spring before the Chomp eats them, they can reach a Barrel Cannon above it that they can use to travel upwards. With two other barrels that move horizontally at a quick pace when entered, the heroes can make it to another Barrel Cannon with a Flaming Tiki Buzz next to it. The cannon moves them horizontally to another barrel with a Flaming Tiki Buzz next to it. The letter K of the K-O-N-G Letters is right above this barrel, and an additional Barrel Cannon is placed in the air at the end of its horizontal path. This cannon moves diagonally, along with the two barrels after it. They primates must shoot barrel-to-barrel with these to be blasted towards some bouncy, red flowers growing on the sides of giant tree-like structures. The flowers are angled so that they soon bounce to the ground below, which is flat and solid. Tiki Boings and some item-containing plants are in this area. A hidden area is also below here that the primates can access to find bananas and even a Puzzle Piece.

When the duo passes through this part of the level, they come under a small tunnel that is placed in a tree-like structure and then to a Barrel Cannon. The cannon shoots them to a nearby solid platform with a plant growing on it. A Barrel Cannon is in a gap next to the platform that moves back and forth horizontally. Two Tiki Zings are in the Kongs' way as they try to aim for the above platform in this barrel. They can grab the letter O and reach the higher platform safely if they shoot between the foes. Another Barrel Cannon is next to this platform. It blasts the heroes upwards while moving in a horizontal path. With two similar barrels, the Kongs can reach a stationary Barrel Cannon high up that can blast them far through the air. The primates fly at a fast speed through a large portion of the jungle, landing in an Auto Fire Barrel that then fires them onto a solid area of land, where the Tutorial Pig and the checkpoint are located.

Stair-like platforms ahead of here lead to a DK Barrel. A Tiki Boing and some Skittlers run all around this area. The primates can reach a slightly lower platform after the DK Barrel with a few more Skittlers on it. Some Barrel Cannons can be viewed in the gap ahead. The stationary barrels can be used to progress over the large gap. The Barrel Cannons are automatically aimed to the cannon following it in this area, so the heroes only need to worry about shooting at the right time, as there are wooden obstacles all along the area that open and close. The Kongs must try to blast past the openings made by them when the two parts of the obstacles move apart. However, if they run into them as they close together, they lose a life and go back to the last checkpoint immediately.

After the heroes shoot past the first three of these opening and closing obstacles, they reach a few Auto Fire Barrels that shoot them between the previous two obstacles and then into another Barrel Cannon. This cannon tilts at certain angles, changing its aim every second. The Kongs must blast out of the barrel as it aims above the wooden obstacle ahead to progress and grab the letter G. After they fall past the letter G, they land in a stationary barrel that aims them towards some Auto Fire Barrels. They must blast through these barrels as the pair of obstacles in their path open. Once they blast through Barrel Cannons away from these objects, they land in a cannon near a giant statue that takes up almost the whole screen. They must blast through its moving teeth to pass it. When they do so, they enter an Auto Fire Barrel that finally shoots them onto a solid platform with the level's Slot Machine Barrel on it; the level is completed when this is hit. 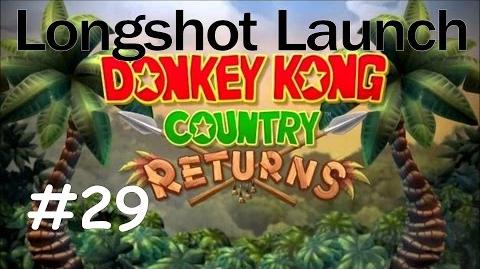