Lockjaw are a species of red piranha fish, first appearing the water stages of Donkey Kong Country 2: Diddy's Kong Quest. They appear on Crocodile Isle and, in later appearances, Donkey Kong Island. Pink versions, called Snapjaws, are related to them.

Lockjaws appeared in Donkey Kong Country 2: Diddy's Kong Quest in various aquatic stages. Unlike most water enemies, Lockjaws would actually attack the Kongs directly when in sight. If Diddy or Dixie Kong get too close, Lockjaws will reel back, charging, and quickly rocket forward, aiming for the lead Kong. Lockjaws get faster as you progress in the game, making them more difficult to defeat or dodge even with Enguarde.

Lockjaws return in Donkey Kong Country 2: Diddy's Kong Quest's follow-up, Donkey Kong Land 2. Their general attack sequence was not changed. Other than appearing as an enemy, they are featured on the cover for the book, swimming after Diddy and Dixie.

Lockjaws reappeared in the Game Boy Advance game, DK: King of Swing and in the DS game, DK: Jungle Climber. Here, they are rather weaker, capable of being defeated by simply being bashed into by Donkey Kong. They attack by biting, as they have in their previous appearances. 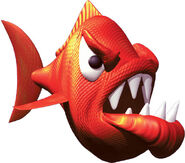